Coele-Syria (Ancient Greek: Κοίλη Συρία), or Cœle-Syria or Celesyria, traditionally given the meaning 'hollow' Syria, was the region of southern Syria disputed between the Seleucid dynasty and the Ptolemaic dynasty. Rather than limiting the Greek term to the Beqaa Valley of Lebanon, it is often used to cover the entire area south of the river Eleutherus including Judea. In fact, Diodorus Siculus indicates Coele-Syria to also include the Judean coasts as far south as Joppa. The Hellenistic term Koile Syria that appears first in Arrian's Anabasis (2.13.7) and has been much discussed, now seems simply to have been a transcription of Aramaic kul, "all, the entire", identifying all of Syria, very much as the range of applications have suggested. [1] 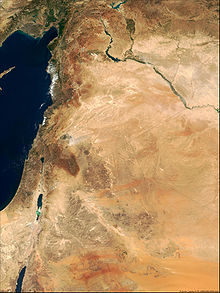 Alexander the Great's general Ptolemy first occupied Coele-Syria in 318 BC. When Ptolemy joined the coalition against Antigonus I Monophthalmus in 313 BC he, however, quickly withdrew from Coele-Syria. In 312 BC Seleucus I Nicator, defeated Demetrius, the son of Antigonus, in the Battle of Gaza which again allowed Ptolemy to occupy Coele-Syria. Though he was again to pull out after only a few months, after Demetrius had won a battle over his general and Antigonus entered Syria in force up to Antigonuses, this brief success had enabled Seleucus to make a dash for Babylonia which Seleucus secured. In 302 BC, Ptolemy joined a new coalition against Antigonus and reoccupied Coele-Syria, but quickly withdrew on hearing a false report that Antigonus had won a victory. He was only to return when Antigonus had been defeated at Ipsus in 301 BC. Coele-Syria was assigned to Seleucus, by the victors of Ipsus, as Ptolemy had added nothing to the victory. Though, given Ptolemy's track record, he was unlikely to organize a serious defense of Coele-Syria, Seleucus acquiesced in Ptolemy's occupation, probably because Seleucus remembered how it had been with Ptolemy's help he had reestablished himself in Babylonia. The later Seleucids were not to be so understanding, resulting in the century of Syrian Wars between the Ptolemies and Seleucids.

Seleucid control over the area of Judea began diminishing with the eruption of the Maccabean Revolt in 165 BC. With Seleucid troops being involved in warfare on the Parthian front, Judea succeeded in securing its independence by 140 BC. Despite attemtps of Seleucid rulers to regain territories, the conquests of Pompey in 64 BC were a decisive blow to them, and Syria became part of the Roman Republic.