In statistical decision theory, where we are faced with the problem of estimating a deterministic parameter (vector)

. In a sense this means that

is an estimator which performs best in the worst possible case allowed in the problem.

Consider the problem of estimating a deterministic (not Bayesian) parameter

from noisy or corrupt data

related through the conditional probability distribution

. Our goal is to find a "good" estimator

for estimating the parameter

, which minimizes some given risk function

. Here the risk function is the expectation of some loss function

. A popular example for a loss function is the squared error loss

, and the risk function for this loss is the mean squared error (MSE).

Unfortunately in general the risk cannot be minimized, since it depends on the unknown parameter

itself (If we knew what was the actual value of

, we wouldn't need to estimate it). Therefore additional criteria for finding an optimal estimator in some sense are required. One such criterion is the minimax criteria.

is called minimax with respect to a risk function

if it achieves the smallest maximum risk among all estimators, meaning it satisfies

Logically, an estimator is minimax when it is the best in the worst case. Continuing this logic, a minimax estimator should be a Bayes estimator with respect to a prior least favorable distribution of

. To demonstrate this notion denote the average risk of the Bayes estimator

with respect to a prior distribution

Definition: A prior distribution

is called least favorable if for any other distribution

Corollary: If a Bayes estimator has constant risk, it is minimax. Note that this is not a necessary condition.

Example 1, Unfair coin: Consider the problem of estimating the "success" rate of a Binomial variable,

. This may be viewed as estimating the rate at which an unfair coin falls on "heads" or "tails". In this case the Bayes estimator with respect to a Beta-distributed prior,

and, according to the Corollary, is minimax.

Definition: A sequence of prior distributions

is called least favorable if for any other distribution

Theorem 2: If there are a sequence of priors

Notice that no uniqueness is guaranteed here. For example, the ML estimator from the previous example may be attained as the limit of Bayes estimators with respect to a uniform prior,

with increasing variance. So neither the resulting ML estimator is unique minimax not the least favorable prior is unique.

Example 2: Consider the problem of estimating the mean of

. The Maximum likelihood (ML) estimator for

in this case is simply 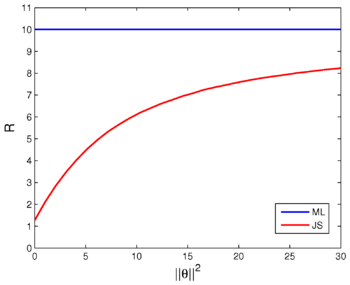 , and, hence, indeed minimax according to Theorem 2 . Nonetheless, minimaxity does not always imply admissibility. In fact in this example, the ML estimator is known to be inadmissible (not admissible) whenever

. The famous James–Stein estimator dominates the ML whenever

. Though both estimators have the same risk

, and they are both minimax, the James–Stein estimator has smaller risk for any finite

. This fact is illustrated in the following figure.

Example 3, Bounded Normal Mean: When estimating the Mean of a Normal Vector

, where it is known that

. The Bayes estimator with respect to a prior which is uniformly distributed on the edge of the bounding sphere is known to be minimax whenever

. The analytical expression for this estimator is

, is the modified Bessel function of the first kind of order n.