West Kingsdown Windmill is a Grade II listed[1] smock mill in West Kingsdown, Kent, England that was built in the early nineteenth century at Farningham and moved to West Kingsdown in 1880. It is the survivor of a pair of windmills.

The post mill was originally built at Sevenoaks. It was built c1792 when miller William Knott leased a piece of ground "with liberty to set up a windmill" and "to pull down and carry away the same". In 1814, Knott bought the property, consisting a house and the "windmill erected by the said William Knott" and 3 acres (1.2 ha) of land for £1000. The mill was standing in 1864 when it was leased by J F Austen to William Eames, Miller at a rate of £13. 15.s 0d quarterly.[2]

The mill had been moved to West Kingsdown by 1880, when it was joined by the smock mill that was moved from Farningham and which survives today. It was burnt down in May 1909 when a steam roller set fire to some straw near the mill and the fire then spread to the mill.

West Kingsdown Windmill was built in the early nineteenth century at Chimham's Farm, Farningham. It was marked on Greenwoods map of 1821 and the Farningham Tithe Map of 1840. In 1880, it was moved to West Kingsdown, joining a post mill that was already there. The post mill burnt down in May 1909. The mill was working by wind until 1928. One of the sails was damaged on 25 December 1929 and the fantail blew off in November 1930.[2] The mill was restored externally in 1960 by Thompson & Son, Millwrights of Alford, Lincolnshire[3] at a cost of £4.400.[4] In 2009, repairs to the weatherboards were made, and the mill was repainted. As of November 2010, it is awaiting the fitting of new sails.[5]

For a description of the machinery, see Mill machinery.

Old Mill was a post mill on a single storey roundhouse. It was winded by a tailpole. It had two Spring sails and two Common Sails carried on a cast iron windshaft. 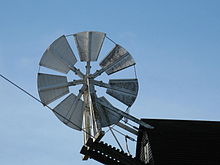 West Kingsdown Mill is a four storey smock mill on a single storey single storey brick base. There was a stage at first floor level. It has two double Patent sails and two Common sails carried on a cast iron windshaft. The mill is winded by a fantail. The original fantail had seven blades,[2] but this was replaced with a six bladed one when the mill was restored in 1960. A seven bladed fantail has since been fitted. All the machinery remains in the mill, except for the final drive to the millstones.[3]