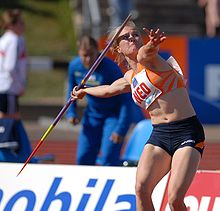 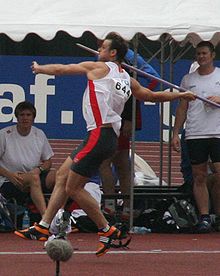 The javelin throw is a track and field athletics throwing event where the object to be thrown is the javelin, a spear approximately 2.5 metres in length. Javelin is an event of both the men's decathlon and the women's heptathlon. The javelin thrower gains momentum by running within a predetermined area.

Unlike the other throwing events (shotput, discus, and hammer), the technique used to throw the javelin is dictated by IAAF rules and "non-orthodox" techniques are not permitted. The javelin must be held at its grip and thrown overhand, over the athlete's shoulder or upper arm. Further, the athlete is prohibited from turning completely around such that his back faces the direction of throw. In practice, this prevents athletes from attempting to spin and hurl the javelin sidearm in the style of a discus throw. Instead of being confined to a circle, javelin throwers are provided with a runway 4 metres wide and at least 30 metres in length, ending in a curved arc from which their throw will be measured; athletes typically use this distance to gain momentum in a "run-up" to their throw. Like the other throwing events, the competitor may not leave the throwing area (the runway) until after the implement lands. The need to come to a stop behind the throwing arc limits both how close the athlete can come to the line before the release as well as the maximum speed achieved at the time of release.

Competition rules are similar to other throwing events: a round consists of one attempt by each competitor in turn, and competitions typically consist of three to six rounds. The competitor with the longest single legal throw (over all rounds) is the winner; in the case of a tie the competitors' second-longest throws are also considered. Competitions involving large numbers of athletes sometimes use a "cut": all competitors compete in the first three rounds, but only athletes who are currently among the top eight or have achieved some minimum distances are permitted to attempt to improve on their distance in additional rounds (typically three). 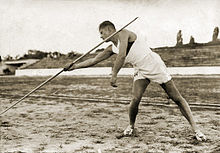 On April 1, 1986, the men's javelin (800 grams (1.76 lb)) was redesigned by the governing body (the IAAF Technical Committee). They decided to change the rules for javelin construction because of the increasingly frequent flat landings and the resulting discussions and protests when these attempts were declared valid or invalid by competition judges. The world record had also crept up to a potentially dangerous level, 104.80 metres by Uwe Hohn. The javelin was redesigned so that the centre of gravity was moved 4 cm forward, further away from the centre of pressure (the point at which the aerodynamic forces of lift and drag act), so that the javelin had an increased downward pitching moment. This brings the nose down earlier, reducing the flight distance by around 10% but also causing the javelin to stick in the ground more consistently. In 1999, the women's javelin (600 grams (1.32 lb)) was similarly redesigned.

Modifications that manufacturers made to recover some of the lost distance, by increasing tail drag (using holes, rough paint or dimples), were outlawed at the end of 1991 and marks made using implements with such modifications removed from the record books. Seppo Räty had achieved a world record of 96.96 metres in 1991 with such a design, but this record was nullified. 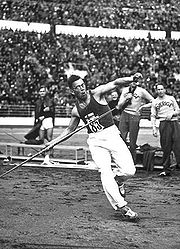 Matti Järvinen throwing the javelin at the 1932 Summer Olympics.

History and the javelin at the Olympics

During the era between the Mycenaean times and the Roman Empire, the javelin was a commonly used offensive weapon. Being lighter than the spear, the javelin would be thrown rather than thrust and thus allowed long distance attacks against one’s enemy. Athletes, however, used javelins that were much lighter than military ones because the idea of the event was to demonstrate distance rather than penetration. The one major difference between the javelin of the ancient games and the javelin of more modern times is a leather thong, called an ankyle that was wound around the middle of the shaft. Athletes would hold the javelin by the thong and when the javelin released this thong unwound giving the javelin a spiraled flight.[1]

The javelin throw has a particularly strong tradition in the Nordic nations of Europe. Of the 69 Olympic medals that have been awarded in the men's javelin, 32 have gone to competitors from Norway, Sweden, or Finland.[2] Finland is the only nation to have ever swept the medals at a currently recognized official Olympics, and has done so twice, in 1920 and 1932. (However, Sweden swept the first four places at the 1906 Intercalated Games. Finland's 1920 sweep also featured an additional fourth place finish. Sweeping the first four places is no longer possible, as only three entrants per country are allowed.) In 1912, Finland also swept the medals in the only appearance in the Olympics of two-handed javelin, an event in which the implement was separately thrown with both the right hand and the left hand and the marks were added together. Quite popular in Finland and Sweden at the time, this event soon faded into obscurity, together with similar variations of the shot and the discus.

Unlike other throwing events, javelin allows the competitor to build speed over a considerable distance. In addition to the core and upper body strength necessary to deliver the implement, javelin throwers benefit from the agility and athleticism typically associated with running and jumping events. Thus, the athletes share more physical characteristics with sprinters than with other, heavier throwing athletes.

Traditional free-weight training is often used by javelin throwers. Metal-rod exercises and resistance band exercises can be used to train a similar action to the javelin throw to increase power and intensity. Without proper strength and flexibility, throwers can become extremely injury prone, especially in the shoulder and elbow. Core stability can help in the transference of physical power and force from the ground through the body to the javelin. Stretching and sprint training are used to enhance the speed of the athlete at the point of release, and subsequently, the speed of the javelin. At release, a javelin can reach speeds approaching 113 km/h (70 mph).

A womens and a mens javelin

A new model was introduced in 1986, and all records started fresh.

A new model was introduced in 1999 and all records started fresh.

The following sites contain more information and statistics for Javelin throwing as well as for other track and field sports: