Slave to the Rhythm (song)

Slave to the Rhythm (song) 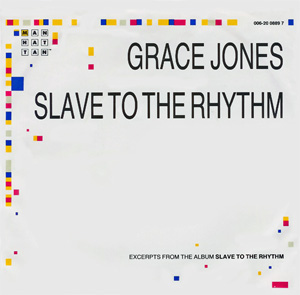 "Slave to the Rhythm" was the first single from ' album of the same name, which was released in . The song and the album was written by , Simon Darlow, and and was produced by Horn. This was Jones first album in three years, and it contained eight variations of the same song (the single's B-side is another variation, yet to be released on CD). The single became one of her greatest commercial successes and counts as one of Jones' signature tunes.

On the "Slave to the Rhythm" album the hit single version of the track is - like on many other contemporary releases - confusingly re-titled; "Ladies & Gentlemen: Miss Grace Jones". The track called "Slave to the Rhythm" on the album is in turn an entirely different interpretation of the song - a well-known fact that somehow managed to allude the producers of a recent hits compilation - which lead to record company issuing the wrong version of one of Jones' greatest hits on one of their many "best of" packages.

Two single CDs have been re-released with multiple remixes of the song. The first includes the long version of the original, co-titled "Blooded".

The song peaked at #12 on the in 1985, and became a new #28 hit in (in remix form). The original version of the single, and its remixes, also topped the American dance chart in February of . It also became her biggest Hit in Germany where it peaked at #4 and stay in the Top 10 for eight weeks.