Origin of the name Khuzestan

Origin of the name Khuzestan 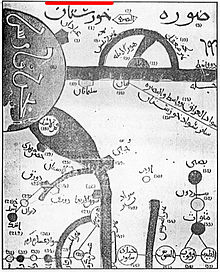 An Arabic map from the 9th century. Khuzestan is overlined in red. The name Persian Gulf is written in upper left. 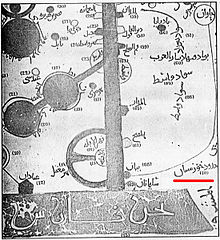 Regional map showing the word Khuzestan, underlined in red, from the 9th century text Al-aqalim by the great geographer Istakhri.

In some instances, sugar and sugar cane have been given as the meaning of Khuz.[1] The fertile soil of Khuzestan has a splendid potential for growing this plant, making excellent harvests for sugar cane possible here.

However, most experts believe the name Khuzestan to be derived from Ķūzī, the name of the original non-Semitic people of the province, whose distinctive language reportedly survived until Sassanid times.[2]

Every author of the early Islamic period, whether Arabic, Persian, or African, referred to the entire region as Ahvaz. This is verified by referring to texts such as those by Tabari, Abolfazl Beyhaghi, Tarikh-i Sistan, and Safar nama of Naser Khosrow, among many others. Hamdollah Mostowfi in his Nozhat ul-Qolub, for example, writes about Ardashir I in Ahvaz. The word "Khuzestan", however, seems to have been widely used to refer to the region by the 9th century.

Some scholars believe Ahvaz and Khuzestan are related to the name Ooksin, a city established during the era of the Elamite civilization, and are the altered forms of the words Ooks, Ookz, Hookz, Huz and Khuz. Iraj Afshar in his Nigāhī bih Khūzistān : majmū`ah´ī az awzā`-i tārīkhī, jughrāfiyā'ī, ijtimā`i, iqtisādī-i mintaqah[3] states that Uxi was the Greek counterpart of the Elamite word Ūvja.

According to Jules Oppert, the word Ūvja, was pronounced as Xuz or Khuz in the Elamite language. The word Ūvja appears abundantly in many texts and on Achaemenid inscriptions at Naqsh-e Rustam [4], and on Darius's epigraphs at Persepolis and Susa among others[5] Ūvja, or its Greek counterpart Uxi, were names used to refer to the land or the peoples inhabiting the land of Khuzestan.

Furthermore, Ibn Nadeem, in his book al-Fehrest ("الفهرست"), mentions that all the Median and Persian lands of antiquity spoke one language. In his book, which is the most credible account of spoken languages of Iran during the early Islamic era, he quotes the great scholar Abdullah Ibn al-Muqaffa:

He then adds that Khuzi is the unofficial language of the royalty and comes from Khuzestan.

In Majma-ul-Tawarikh wa al-Qesas ("The Collection of histories and Tales") written in 1126CE, Khuzestan appears with such names as Hajuestan, Hobujestan, and Ajar, which seem to be derived from Hobujestan and Hujestan in Pahlavi language. According to Sir Henry Rawlinson, in Pahlavi, Ūvja is pronounced Hobuj and therefore both the names Ahvaz and Khuzestan derive their names from here.

The Old Persian word Hūjiya "Elam"[6] appears abundantly in many texts and on Achaemenid inscriptions at Naqsh-e Rustam[4], and on Darius's epigraphs at Persepolis and Susa among others[5] Hūjiya, or its Greek counterpart Uxi[7], were names used to refer to the land or the peoples inhabiting Susiana. In Middle Persian, Hūjiya "Elam, Susiana Province" became Huź "Susiana", and the modern form of this word is Xuz.[6] As with Sistan, the common Persian ending -stan "land, region" was added at some point. The Old Persian: Grammar, Texts, Lexicon by Roland G. Kent of the American Oriental Society, lists the following chains of derivation:

Whereas in some Iranian dialects such as Luri and Bakhtiari (also based in and around Khuzestan), the sound "h" is sometimes used for pronouncing Kh, the words oo, hoo and Khuz have in the process of time been added to the suffix -estan, and the word oojestan has gradually changed to Hujestan, forming the word Khuzestan. Such conversions derive from the fact that in ancient Persian dialects and in Pahlavi language, the sound "oo" was changeable to "hoo" as in such words like Oormazd --> Hoormazd or Ooshmand --> Hooshmand. And Hoordad has also been pronounced Khordad and Khoortat.

The Arabs of Khuzestan are not indigenous to the province. Most Arabs such as the Bani Kaab tribe, came from the west and southwest of the Tigris and Euphrates outside of Khuzestan, beginning in the 15-16th centuries.

In 1441, Muhammad ibn Falah, founder and leader of the Msha'sha'iya, initiated a wave of attacks on Khuzestan, and the cities of Hoveizeh, Khorramshahr, Ahvaz, Susa, and Dezful started seeing large increases in Arab populations. The term Arabistan thus came into use to refer to the Arab populated areas of this region. At this time, many texts started using both Khuzestan and Arabistan as the region's name. Examples are Majalis Al-Mumineen written by Ghadhi Nurollah Shushtari in 1585, Giti Gosha by Mirza Muhammad Sadigh Musawi, Nasikh Al-Tawarikh by Lisan Malek Sepehr, Muntazam Naseri and Mar'at ul-Baladan by Sani al-Mulk, Sharh Waghi'a by Ismail Mirza Dorughi, and the Afsharid era work Jahan goshay-i Naderi. The Safavid era account Tarikh 'Alam Aray-i Abbasi speaks of dispatching troops to "Khuzestan wa Arabistan" during the 8th year of Shah Abbas' reign.

The name Arabistan, however, became more prevalent over time as the British became gradually involved in the Persian Gulf region. By the time of the Qajar Mozaffareddin Shah, the name Arabistan was meant to completely refer to all of Khuzestan.[8]

With the centralized Pahlavi government of Iran gradually strengthening, Reza Shah restored the name of the province to its original in 1923. 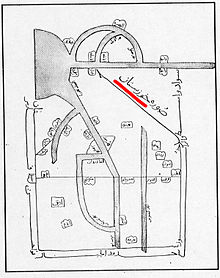 10th century regional map of Khuzestan by Ibn Hawqal. The word is underlined in red. 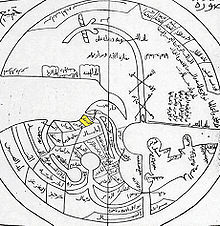 10th century map of the World by Ibn Hawqal, the word Khuzestan is shaded in yellow background.

The following is a list of sources that specifically use, describe, or discuss the word "Khuzestan". Almost all are Arabic.

9th century and before

18th century and after