M-55 is a state trunkline highway in the northern part of the US state of Michigan. M-55 is one of only three state highways that extend across the Lower Peninsula from Lake Huron to Lake Michigan; the others are M-46 and M-72. The highway crosses through rural forest and farmlands to connect Manistee with Tawas City. M-55 crosses two of the major rivers in the state. Two sections of the highway follow along freeways near Cadillac and West Branch. Running for 150.944 miles (242.921 km) through the state, M-55 is maintained by the Michigan Department of Transportation (MDOT).

The highway was first designated by July 1, 1919 along a portion of the current roadway. In a series of extensions, M-55 was lengthened to connect its current endpoints by the early 1930s. The trunkline has been rerouted in sections since that time resulting in the modern roadway alignment. One set of changes produced a business loop in the Houghton Lake area.

M-55 starts at a three-way intersection with US 31 north of Manistee. The trunkline runs southeast on Caberfae Highway over the Manistee River and through the Peters and Highpoint bayous. The highway passes near the community of Eastlake before turning eastward through forest land. In eastern Manistee County, the roadway crosses the Pine River south of the Tippy Dam Pond in Wellston. M-55 intersects M-37 in western Wexford County southwest of the Caberfae Peaks Ski & Golf Resort. The roadway turns northeasterly along the south shore of Lake Mitchell where it then curves southeasterly to run concurrently along M-115 along the south shore of Lake Cadillac and through the south side of Cadillac. At the interchange with the US 131 freeway, M-55 merges north along the freeway, bypassing downtown Cadillac.[2][3]

On the east side of town, M-55 leaves the freeway and turns east again running through the Pere Marquette State Forest along Watergate Road. When the highway meets M-66, M-55 joins M-66 and runs north through farmland. As the two highways approach Lake City, they run along the shore of Lake Missaukee and through downtown. M-55 turns east again along Houghton Lake Road, separating from M-66 north of the central business district. This section of trunkline passes through mixed farm and wood lands that transitions to mostly forests near Merritt. The road crosses the Muskegon River and follows Lake City Road into the outskirts of Houghton Lake. M-55 passes over the US 127 freeway and enters Houghton Lake Heights. There the highway runs southeasterly along the shores of Houghton Lake into downtown Houghton Lake. M-18 briefly joins M-55 through Prudenville on the east side of the lake, and M-55 follows West Branch Road as it continues east toward Interstate 75 (I-75).[2][3]

M-55 follows I-75 between exits 227 and 215, a distance of about 12 miles (19 km).[2] This section is the only part of M-55 that has been listed on the National Highway System,[4] a system of roads important to the nation's economy, defense, and mobility.[5] From the end of the freeway concurrency, M-55 follows Business Loop I-75 (BL I-75) into downtown West Branch. After leaving town, the highway runs through farm lands in rural Ogemaw and Iosco counties. The highway curves southeast into Tawas City. The western end of M-55 is at and intersection with US 23 along the shores of the Tawas Bay of Lake Huron.[2][3] 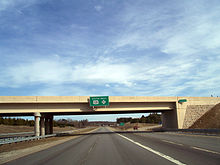 M-55 had its beginning by July 1, 1919 when it was designated from Cadillac to Merritt.[6] In 1926, M-55 was extended eastward to Houghton Lake over a section of the former M-14 that was not used for the then-new US 27. At the same time, another segment of the highway was designated between M-76 at West Branch and US 23 at Whittemore.[7] The next year, M-55 was routed along sections of US 27 and M-76 between the two communities.[8] A western extension was added from Cadillac to US 31 near Manistee in 1932 while the eastern end was shifted from Whittemore to Tawas City when US 23 was rerouted through the area.[9][10]

The last gravel segments were paved in Iosco County in the late 1950s.[18][19] Another segment east of Cadillac to M-66 south of Lake City in was realigned in 1973. At the same time, M-55 was co-signed with a portion of the newly opened stretch of I-75 between M-157 and West Branch.[20][21] The last routing change was made in November 2000 when the southern segment of the Cadillac bypass was opened. M-55 was moved out of downtown Cadillac and along the freeway and M-115.[22] US 131 joined M-55 on the bypass the next October when the northern half of the bypass was completed in 2001.[23]