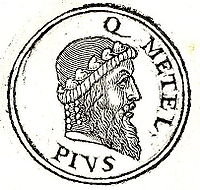 Quintus Caecilius Metellus Pius (ca 130 BC or 127 BC – 63 BC) was a pro-Sullan politician and general. He was named Pius because of his 99 BC petition to return his father from exile[1] and was true to his cognomen for the constance and inflexibility with which he always fought for his father's rehabilitation and return to Rome.

He was elected Quaestor in 97 BC, Tribune in 92 and Pontifex Maximus in 81, Praetor in 89 BC, Consul in 80.[2] He withdrew from Rome during the civil war between Marius and Sulla, returning afterward with the latter.

As a military figure, he had his first commands in the war in 109-107 BC, when he accompanied his father Quintus Caecilius Metellus Numidicus in Numidia during Jugurthine War, where his father took him as a simple cadet.[3] He was later revealed to be one of the best subordinates of Sulla, but without any other objective than fighting the demagogy with which Marius threatened Rome, never participating in the atrocious violence that marked such a troubled phase of the history of Rome. He was also one of the Roman commanders in the Social War of 90 - 89 BC. A Propraetor at that time, Pius stormed Venusia and killed the general of the Marsi, Quintus Poppaedius Silo.[4] In 87 BC Pius by the order of Senate tried to make peace with the Samnites.

Made a Consul in 80 BC, he was then sent to Spain to combat Quintus Sertorius, where Sertorius and Marcus Perpenna Vento faced the Roman power, establishing his bases in Metellinum (today Medellín) Castra Caecilia (today Cáceres), Viccus Caecilius, at the Sierra de Gredos, and at Caeciliana, near Setúbal. During eight years of resistance he was unable to conclusively defeat Sertorius, and it was only after Sertorius' assassination by his own men that the rebels were forced to cede to the military ability of Metellus Pius. Metellus fought along with Gnaeus Pompeius Magnus with whom he shared the glories of the Triumph which was held at the end of 71 BC.[5]