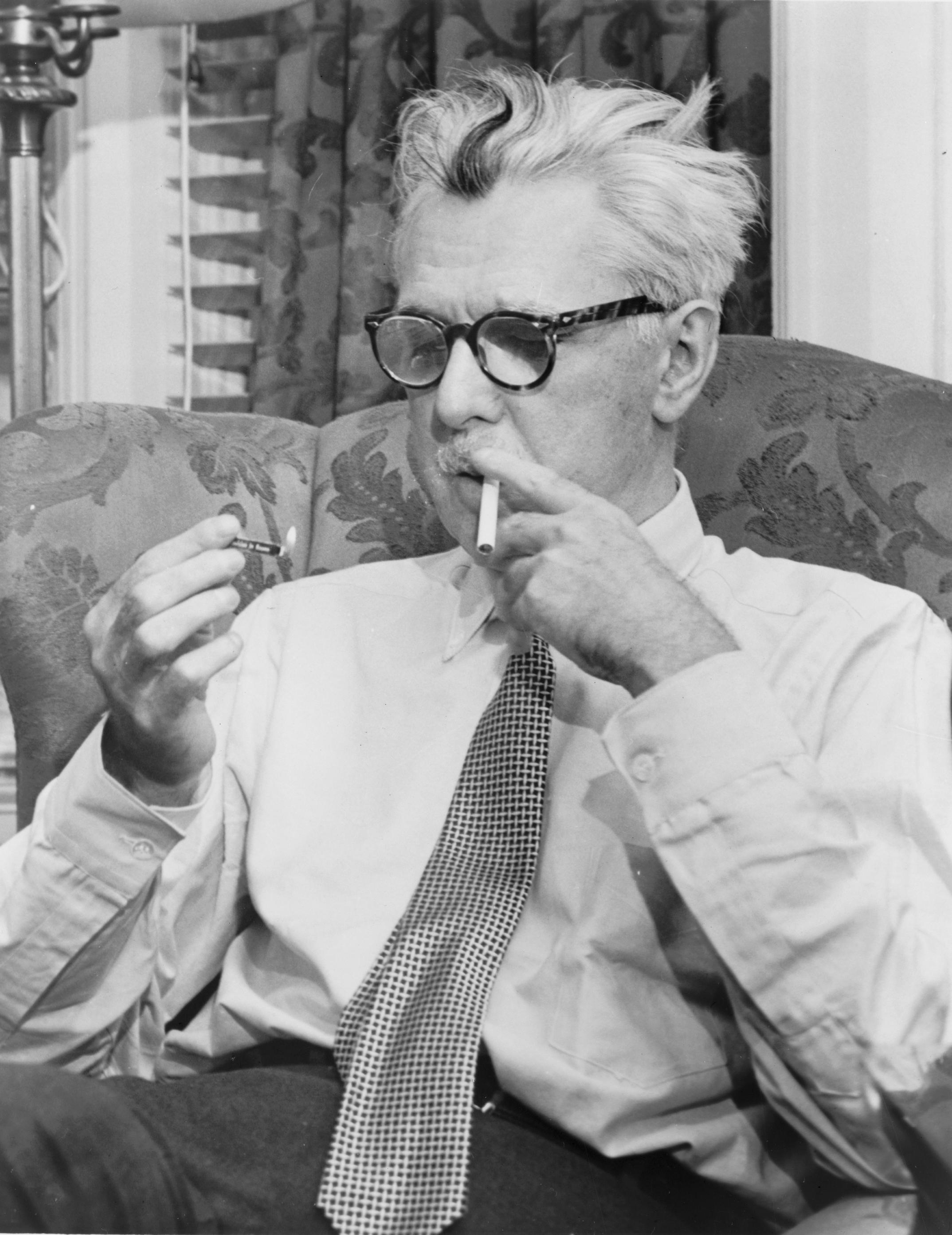 
James Grover Thurber (, &ndash; , ) was an American and .Thurber was best known for his contributions (both cartoons and short stories) to "" magazine.

Thurber was born in Columbus, , to Charles L. Thurber and Mary Agnes (Mame) Fisher Thurber. Both of his parents greatly influenced his work. His father, a sporadically employed clerk and minor politician who dreamed of being a lawyer or an actor, is said to have been the inspiration for the small, timid protagonist typical of many of his stories. Thurber described his mother as a "born comedienne" and "one of the finest comic talents I think I have ever known." She was a practical joker, on one occasion pretending to be crippled and attending a faith healer revival, only to jump up and proclaim herself healed.

Thurber had two brothers, William and Robert. Once, while playing a game of , his brother William shot James in the eye with an arrow. Because of the lack of medical technology, Thurber lost his eye. This injury would later cause him to be almost entirely blind. During his childhood he was unable to participate in sports and activities because of his injury, and instead developed a creative imagination, which he shared in his writings.

From 1913 to 1918, Thurber attended The Ohio State University, where he was a member of the Fraternity. He never graduated from the University because his poor eyesight prevented him from taking a mandatory ROTC course.

From 1918 to 1920, at the close of , Thurber worked as a for the , first in Washington, D.C., and then at the American Embassy in , France. After this Thurber returned to Columbus, where he began his writing career as a reporter for the "" from 1921 to 1924. During part of this time, he reviewed current books, films, and plays in a weekly column called "Credos and Curios," a title that later would be given to a posthumous collection of his work. Thurber also returned to Paris in this period, where he wrote for the "" and other newspapers.

In 1925, he moved to in , getting a job as a reporter for the "New York Evening Post". He joined the staff of "" in 1927 as an editor with the help of his friend and fellow "New Yorker" contributor, . His career as a cartoonist began in 1930 when White found some of Thurber's drawings in a trash can and submitted them for publication. Thurber would contribute both his writings and his drawings to "The New Yorker" until the 1950s.

Thurber was married twice. In 1922, Thurber married Althea Adams. The marriage was troubled and ended in divorce in May 1935. Adams gave Thurber his only child, his daughter Rosemary. Thurber remarried in June 1935 to Helen Wismer. His second marriage lasted until he died in 1961, at the age of 66, due to complications from , which followed upon a suffered at his home. His last words, aside from the repeated word "God," were "God bless... God damn," according to Helen Thurber.

Thurber worked hard in the 1920s, both in the U.S. and in France, to establish himself as a professional writer. However, unique among major American literary figures, he became equally well known for his simple, surrealistic drawings and cartoons. Both his skills were helped along by the support of, and collaboration with, fellow "New Yorker" staff member . White insisted that Thurber's sketches could stand on their own as artistic expressions &mdash; and Thurber would go on to draw six covers and numerous classic illustrations for the "New Yorker."

While able to sketch out his cartoons in the usual fashion in the 1920s and 1930s, his failing eyesight later required him to draw them on very large sheets of paper using a thick black crayon (also, on black paper using white chalk, from which they were photographed and the colors reversed for publication). Regardless of method, his cartoons became as notable as his writings; they possessed an eerie, wobbly feel that seems to mirror Thurber's idiosyncratic view on life. He once wrote that people said it looked like he drew them under water. (, contemporary and friend of Thurber, referred to his cartoons as having the "semblance of unbaked cookies."). The last drawing Thurber was able to complete was a self-portrait in yellow crayon on black paper, which appeared on the cover of the July 9, 1951, edition of "". [cite web
last =
first =
authorlink =
coauthors =
title = Time Magazine Cover: James Thurber - July 9, 1951
work = Time Archive: 1923 to the Present
publisher = Time Inc.
date = 1951-07-09
url = http://www.time.com/time/covers/0,16641,19510709,00.html
format =
doi =
accessdate = 2007-01-31 ] The same drawing also appeared on the dust jacket of "The Thurber Album" (1952).

Many of his short stories are humorous fictional memoirs from his life, but he also wrote darker material, such as "The Whip-Poor-Will," a story of madness and murder. "The Dog Who Bit People" and "The Night the Bed Fell" are his most well known short stories; they can be found in "My Life and Hard Times", the creative mix of autobiography and fiction which was his 'break-out' book. Also notable, and often anthologized, are "," "The Catbird Seat," "A Couple of Hamburgers," "The Greatest Man in the World" and "If Grant Had Been Drinking at Appomattox," which can be found in "The Thurber Carnival". "The Middle Aged Man on the Flying Trapeze" has several short stories with a tense undercurrent of marital discord. The book was published the year of his divorce and remarriage. His story "You Could Look It Up," about a midget being brought in to take a walk in a baseball game, is said to have been an inspiration for 's stunt with with the St. Louis Browns in 1951. Veeck claimed an older provenance for the stunt, but was certainly aware of the Thurber story. [cite book
last = Veeck
first = Bill
authorlink = Bill Veeck
coauthors = Ed Linn
title = "A Can of Beer, a Slice of Cake—and Thou, Eddie Gaedel," from Veeck — As In Wreck: The Autobiography of Bill Veeck
publisher =
year = 1962
location = Chicago
pages = pp 11-23
url = http://www.press.uchicago.edu/Misc/Chicago/852180.html
doi =
id = ISBN 0-226-85218-0 ]

In addition to his other fiction, Thurber wrote over seventy-five s, most of which were collected in "Fables for Our Time & Famous Poems Illustrated" (1940) and "Further Fables for Our Time" (1956). These usually conformed to the fable genre to the extent that they were short, featured anthropomorphic animals as main characters, and ended with a as a tagline. An exception to this format was his most famous fable, "," which featured an all-human cast except for the unicorn, which didn't speak. Thurber's fables were satirical in nature, and the morals served as s rather than advice to the reader. His stories also included several book-length fairy tales, such as "The White Deer" (1945) and "The Wonderful O" (1957). The latter was one of several of Thurber's works illustrated by .

Thurber's prose for "The New Yorker" and other venues also included numerous humorous s. A favorite subject, especially toward the end of his life, was the . Pieces on this subject included "The Spreading 'You Know'," which decried the overuse of that pair of words in conversation, "The New Vocabularianism," "What Do You Mean It "Was" Brillig?" and many others. Thurber's short pieces, whether stories, essays or something in between, were referred to as "casuals" by Thurber and the staff of "The New Yorker". [cite web
last =
first =
authorlink =
coauthors =
title = The Business of Being Funny
work =
publisher = Time Inc.
date = 1989-11-05
url = http://query.nytimes.com/gst/fullpage.html?res=950DE5D9113CF936A35752C1A96F948260
format =
doi =
accessdate = 2007-08-17 ] Thurber wrote a biographical memoir about "The New Yorker"'s founder and publisher, , titled "The Years with Ross" (1958).

Thurber also wrote a five-part "New Yorker" series, between 1947 and 1948, examining in depth the phenomenon, based on near-constant listening and researching over the same period. Leaving nearly no element of these programs unexamined, including their writers, producers, sponsors, performers, and listeners alike, Thurber re-published the series in his anthology, "The Beast in Me and Other Animals" (1948) under the section title "Soapland." The series was one of the first to examine such a pop culture phenomenon in depth and with just enough traces of Thurber's wit to make it more than just a sober piece of what would later be called investigative reporting.

Thurber teamed with college schoolmate (and actor/director) to write a major Broadway hit comic drama of the late 1930s, "", which was made into a film in 1942, starring , , and . In 1947 played the title character in "The Secret Life of Walter Mitty", a film that had little to do with the original short story and which Thurber hated. In 1951 animation studio announced a forthcoming feature to be faithfully compiled from Thurber's work, titled "Men, Women and Dogs".

Near the end of his life, in 1960, Thurber finally was able to fulfill his long-standing desire to be on the professional stage by playing himself in 88 performances of the revue "", based on a selection of Thurber's stories and cartoon captions. Thurber appeared in the sketch "File and Forget," dictating fictional correspondence to his publisher.

A network television series based on Thurber's writings and life entitled "" was broadcast on in 1969-70, starring William Windom as the Thurber figure. The show won a 1970 as the year's best comedy series, and Windom won an Emmy as well. The animation of Thurber's cartoons on "My World and Welcome to It" led to the 1972 film "", which concludes with an animated rendering of Thurber's classic anti-war work "The Last Flower." Windom went on to perform Thurber material in a one-man stage show.