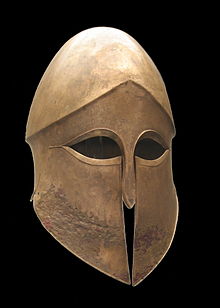 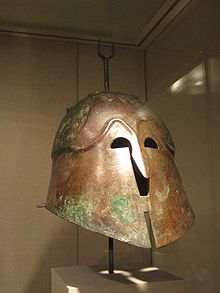 The Corinthian helmet originated in ancient Greece and took its name from the city-state of Corinth. It was a helmet made of bronze which in its later styles covered the entire head and neck, with slits for the eyes and mouth. A large curved projection protected the nape of the neck. It also protected the cheek bones, which Greeks adored.

Out of combat, a Greek hoplite would wear the helmet tipped upward for comfort. This practice gave rise to a series of variant forms in Italy, where the slits were almost closed, since the helmet was no longer pulled over the face but worn cap-like. Although the classical Corinthian helmet fell out of use among the Greeks in favour of more open types, the Italo-Corinthian types remained in use until the 1st century CE, being used, among others, by the Roman army.

Apparently (judging from artistic and archaeological evidence) the most popular helmet during the Archaic and early Classical periods, the style gradually gave way to the more open Thracian helmet, Chalcidian helmet and the much simpler pilos type, which was less expensive to manufacture and did not obstruct the wearer's critical senses of vision and hearing as the Corinthian helmet did. Numerous examples of Corinthian helmets have been excavated, and they are frequently depicted on pottery.

The Corinthian helmet was depicted on more sculpture than any other helmet; it seems the Greeks romantically associated it with glory and the past. The Romans also revered it, from copies of Greek originals to sculpture of their own. From the sparse pictorial evidence we have of the republican Roman army, it seems that in Italy the Corinthian helmet evolved into a jockey-cap style helmet called the Italo-Corinthian, Etrusco-Corinthian or Apulo-Corinthian helmet, with the characteristic nose guard and eye slits becoming mere decorations on its face. Given many Roman corruptions of ancient Greek ideas, this change was probably also a corruption of the tradard over the forehead, on Greek art. This helmet remained in use well into the 1st century CE.

Herodotus mentions the Corinthian helmet in his Histories when writing of the Machlyes and Auseans, two tribes living along the River Triton in ancient Libya (the portion of ancient Libya he describes is most likely in modern Tunisia). The tribes chose annually two teams of the fairest maidens who fought each other ceremonially with sticks and stones. They were dressed in the finest Greek panoply topped off with a Corinthian helmet. The ritual fight was part of a festival honoring the virgin goddess Athena. Young women who succumbed to their wounds during the ordeal were thought to have been punished by the goddess for lying about their virginity (Histories, 4.180).

Lendon, J.E., Soldiers and Ghosts, A History of Battle in Classical Antiquity (2005)