The Easter parade is an American cultural event consisting of a festive strolling procession on Easter Sunday. Typically, it is a somewhat informal and unorganized event, with or without religious significance. Persons participating in an Easter parade traditionally dress in new and fashionable clothing, particularly ladies' hats, and strive to impress others with their finery. The Easter parade is most closely associated with Fifth Avenue in New York City, but Easter parades are held in many other cities. Starting as a spontaneous event in the 1870s, the New York parade became increasingly popular into the mid-20th century—in 1947, it was estimated to draw over a million people.[1] Its popularity has declined significantly, drawing only 30,000 in 2008. 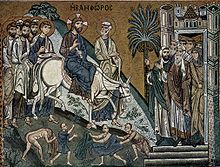 Jesus' entry into Jerusalem on Palm Sunday has been cited as the earliest precursor to modern Easter parades.

Easter processions or parades, often including special dress, have been part of Christian culture since its earliest beginnings. The Bible records two processions in the first Holy Week. The first was on Palm Sunday as Jesus was welcomed to Jerusalem by an adoring throng. The second took place as Jesus carried a cross to Calvary. These processions are often commemorated in Christian church services, and are seen as the earliest predecessors of the modern Easter parade.[2]

During the Dark Ages, Christians in Eastern Europe would gather in a designated spot before Easter church services, then walk solemnly to the church. Sometimes the congregation would form another parade after the services, retracing their steps and singing songs of praise. These processions had two purposes—to demonstrate to churchgoers the unity of spirit found in their faith, and to reach out to nonbelievers in a highly visible manner. Even in those times, participants wore their finest attire to show respect for the occasion.

In the Middle Ages, the clergy expanded these processions into teaching tools. Paintings and statues would be placed along city streets, where church members could walk from one to another to see all the "stations of the cross." To a public that had no access to the Bible and often could not understand the Latin language in which church services were conducted, these special processions were a means to understanding their faith.

Other parades have been held on important days during and close to Lent. An example can be found in today's parades on Mardi Gras. Beginning about 1782, German settlers in Pennsylvania held non-religious parades on Easter Monday, then widely celebrated as a holiday. The parades continued for over a century.[3]

Having new clothes for Easter had deep roots in European customs. Sacred times called for special forms of dress—material markers of holiness and celebration. Distinctive garb for Easter, like one's "Sunday best" and the special vestments of priests, for centuries showed the solemnity and sacredness of the season.

A superstition current in Tudor times held that unless a person had new homespun cloth available at Easter, moths and crickets would eat the old goods, and destructive rooks would nest in large numbers around the residence.[4] An old Irish adage stated "For Christmas, food and drink; for Easter, new clothes," and a 15th-century proverb from Poor Robin's Almanack states that if on Easter Sunday some part of one's outfit is not new, one will not enjoy good luck during the year:[5]

At Easter let your clothes be new,
Or else be sure you will it rue.

Some authorities attribute the introduction of elaborate Easter ceremonies, including gaudy dress and display of personal finery, to the Roman Emperor Constantine I in the early part of the 4th century.[1] 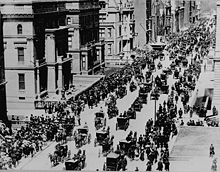 From the 1880s through the 1950s, New York's Easter parade was one of the main cultural expressions of Easter in the United States. It was one of the fundamental ways that Easter was identified and celebrated.[5] The seeds of the parade were sown in New York's highly ornamented churches—Gothic buildings such as Trinity Episcopal Church, St. Patrick's Cathedral, and St. Thomas' Episcopal Church. In the mid-19th century, these and other churches began decorating their sanctuaries with Easter flowers. The new practice was resisted by traditionalists, but was generally well-received. As the practice expanded, the floral displays grew ever more elaborate, and soon became defining examples of style, taste, abundance, and novelty. Those who attended the churches incorporated these values into their dress. In 1873, a newspaper report about Easter at Christ Church said "More than half the congregation were ladies, who displayed all the gorgeous and marvelous articles of dress,... and the appearance of the body of the church thus vied in effect and magnificence with the pleasant and tasteful array of flowers which decorated the chancel."

By the 1880s, the Easter parade had become a vast spectacle of fashion and religious observance, famous in New York and around the country. It was an after-church cultural event for the well-to-do—decked out in new and fashionable clothing, they would stroll from their own church to others to see the impressive flowers (and to be seen by their fellow strollers). People from the poorer and middle classes would observe the parade to learn the latest trends in fashion.

By 1890, the annual procession held an important place on New York's calendar of festivities and had taken on its enduring designation as "the Easter parade."

As the parade and the holiday together became more important, dry goods merchants and milliners publicized them in the promotion of their wares. Advertisements of the day linked an endless array of merchandise to Easter and the Easter parade. In 1875, Easter had been invisible on the commercial scene. By 1900, it was as important in retailing as the Christmas season is today.

Not everyone was enthused about the display of wealth and beauty. Critics worried regularly over Easter extravagance and the "vaunting of personal possessions" that offended deep-seated American values of simplicity, frugality, and self-denial. In 1914, social critic Edwin Markham spotlighted the crushing hardships of the sweatshop workers who made Easter's artificial flowers. During the Great Depression, groups of unemployed workers paraded in coarse and worn-out clothing, often carrying banners drawing attention to their plight. One of these compared the cost of a single Fifth Avenue gown to a year's worth of welfare relief for a job seeker and his family. Cranks and demagogues often used the parade to attract public attention and to plead their questionable causes.

In 1933, American songwriter Irving Berlin wrote the music for a revue on Broadway called As Thousands Cheer. It included his song "Easter Parade", which he had been working on for fifteen years, and in which he had finally captured the essence of the parade. Both the song and the revue were tremendously popular. The song became a standard, and fifteen years later was the basis for the film Easter Parade.[6]

By the mid-20th century, the parade's religious aspects had faded, and it was mostly seen as a demonstration of American prosperity. The year 1946 saw a resurgence of stunts, pranks, and extravagant behavior. In 1947, the State Department's Voice of America did a radio broadcast of the Fifth Avenue parade to the Soviet Union, the idea being to show the economic inferiority of the Soviet system. In 1955, The Saturday Evening Post stated that New York's springtime pageant was only an incidental celebration of a religious holiday, and had become a reflection of the fact that, in America, a person was as good as the clothes and other goods he or she was able to buy. The parade itself had become an unstructured, boundless event, with no apparent beginning, ending, organization, or purpose. What had begun in the 1870s as a parade of refinement and religious display had become merely an ostentatious frolic.[7]

The decline continued, and by 2008, New York's Easter parade was an echo of Halloween, with people and pets in outlandish costumes, often satirizing the parade's former glory by, to cite a typical example, wearing garish hats with live birds in flower-adorned cages.[8]

As New York's parade grew in prominence from the 1880s onward, other cities developed their own versions. Philadelphia and Boston were among these, as were Coney Island and Atlantic City, where the parades became tourist attractions. In 1925, Coney Island merchants hired fifty show girls to parade in bathing suits as part of the event. The crowds were huge. During the 1920s, Atlantic City's parade attracted 200,000 and more. The parade there had become a vacation carnival of costuming and consumption—a rollicking amusement for the tourist.