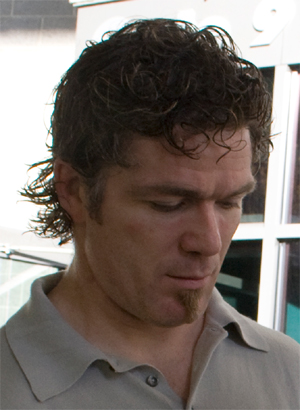 Brad May (born , in , ), is an left winger currently playing for the of the . He grew up in , but played his rep minor hockey in Markham, .

May is known more for his enforcing skills, rather than his scoring touch. May is also noted as being a "solid leader in the dressing room." [ [http://tsn.ca/nhl/teams/players/bio/?id=89&hubname=nhl-ducks TSN : NHL-DUCKS - Canada's Sports Leader ] ]

Brad May was drafted by the 14th overall in the first round of the . May is famous for scoring a series clinching goal in the 1993 semifinals against the in game four, which is when broadcaster made the famous "May Day!" call.

May was subsequently traded by the Sabres to the for forward on February 4, 1998.

On th, , May signed with the as an for two years. He was later traded on th, to the for goaltender Michael Wall. The Ducks went on to win the that year, and May would have his name engraved on the Cup for the first time in his career.

It was also with the Ducks that May would play his 900th career NHL game. During that game, he scored his 125th career goal, as the Ducks beat the Kings that night. [http://ducks.nhl.com/team/app?gameNumber=270&gameType=2&page=Recap&season=20072008&service=page]

May was selected to ride on Anaheim city's float at the 2008 Rose Bowl Parade to accompany the Cup. (As the regulations state that the outside of the float must exclusively use organic material, ABC commentators speculated that the city got an exception to display the Cup.) [http://www.ocregister.com/news/float-ccix-character-1950338-anaheim-cup]

As a member of the in November , May was suspended for 20 games for slashing forward in the nose with his stick. Heinze would need nine stitches, but returned to ice quickly. After the game, May apologized to Heinze, who accepted the apology. [ [http://www.cbsnews.com/stories/2000/11/15/sports/main249765.shtml Coyotes' May Suspended 20 Games, Brad May Suspended By NHL For 20 Games - CBS News ] ] At the time, the 20 game suspension was the fourth longest in NHL history.

May was also noted for allegedly putting the bounty on the head of Colorado's that ultimately resulted in the incident that essentially ended Moore's career. May was named in a lawsuit filed by Moore, but charges were later dropped. [ [http://www.startribune.com/1330/story/1127688.html Questionable punch has team fighting mad ] ] [ [http://jezz.ca/archives/2006/02/16/steve-moore-needs-money/ Steve Moore Needs Money at JezzJournal ] ]

May was suspended for three games in the 2006–2007 NHL Stanley Cup Playoffs for punching defenceman in the face during the final minutes of game four between the Ducks and Wild. Both teams were involved in a large scrum of fighting, pushing, and shoving. May turned around and without warning, punched Johnsson, who was knocked unconscious for a short amount of time. While Johnsson was unconscious Brad May picked Johnsson up off of the ice and slammed him back down in a effort to further injure him. Johnsson was not seriously injured, but was hospitalized, and missed game five of the series. The Ducks would win that game and eliminate the Wild from the Playoffs. In an interview, May said that he intended to contact Johnsson to apologize and explain what happened. [ [http://nc.startribune.com/blogs/wildblog/?p=164 Russo’s rants » Blog Archive » Pictures of May/Johnsson incident, White doubtful, Brad May transcript ] ]