Jackson is a city located along Interstate 94 in the south central area of the U.S. state of Michigan, about 40 miles (64 km) west of Ann Arbor and 35 miles (56 km) south of Lansing. It is the county seat of Jackson County.[3] As of the 2010 census, the city population was 33,534. It is the principal city of the Jackson Metropolitan Statistical Area, which includes Jackson County and has a population of 160,248.[4]

It was founded in 1829, and named after President Andrew Jackson.

According to the United States Census Bureau, the city has a total area of 11.1 square miles (28.7 km2), all of it land. 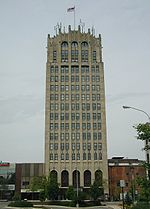 On July 3, 1829, Horace Blackman, accompanied by Alexander Laverty, a land surveyor, and an Indian guide forded the Grand River and made camp for the night at what is now Trail and S. Jackson Street. They arrived in Jackson on a well-traveled Indian trail leading west from Ann Arbor. Blackman hired Laverty and Pewytum to guide him west. Blackman returned to Ann Arbor and then Monroe and registered his claim for 160 acres (65 ha) at two dollars an acre. Blackman returned to Jackson in August 1829, with his brother Russell. Together they cleared land and built a cabin, built on the corner of what would become Ingham and Trail streets. The town was first called Jacksonopolis. Later, it was renamed Jacksonburgh. Finally, in 1838 the town's name was changed to simply Jackson.

Birthplace of the Republican Party – "Under the Oaks"

A Michigan Historical Marker at what is now the northwest corner of Second and Franklin streets in Jackson commemorates an anti-slavery convention of men on July 6, 1854. Meeting outside to avoid a hot, over-crowded hall, the group ultimately selected a slate of candidates for state elections. The marker identifies this as the birth of the Republican Party. The site, an oak grove on "Morgan's Forty", then on the outskirts of town, became known as "Under the Oaks".[6] 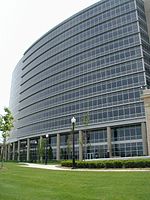 Three major private employers in the city are CMS Energy, which provides natural gas and electrical services to much of Michigan and has its international headquarters in the city, as well as Allegiance Health (Formerly Foote Hospital) and the Eaton Corporation.

Michigan Automotive Compressor, Inc. (MACI) is the largest manufacturer in Jackson County and its fourth-largest individual employer. However, in February 2009 it began offering voluntary buyouts to its workers, in reaction to the slowing economy.[7]

The City of Jackson currently assesses a 1% income tax to residents and businesses located within the city, and 0.5% for non-residents working within the city limits. The income tax provides $7,000,000 of revenue, or 32% of the city's annual budget.

The Jackson area was the home of Indy 500-winning car owner U. E. Patrick ("Pat" Patrick) and NASCAR team owner Harry Melling. Patrick Racing was formed in 1978 concurrent with the formation of Championship Auto Racing Teams (CART). For many years CART was sponsored by PPG. Patrick Racing won three Indianapolis 500s and two CART PPG championships with Gordon Johncock and Emerson Fittipaldi before the team folded in 1991. The team was revived in 1994 to test Firestone Indy car tires, and won the 1995 Michigan 500. Patrick Racing jumped to the IRL in 2004 and folded at the end of the season. Jackson area residents gave early financial support to Bill Elliott, then a promising young driver who joined the new Melling Racing team in 1982. Melling Racing with Elliott driving the Coors sponsored number 9 Ford Thunderbird won the NASCAR Winston Cup series title in 1988.

Education continues for adults who can take advantage of programs offered at three institutions of higher learning: Jackson Community College (JCC), Baker College, and Spring Arbor University. There are an additional 15 institutions all within one hour of Jackson County.

Jackson has a number of notable historic churches, several of which were established prior to the American Civil War. The First Baptist Church was established in 1839; the present building, a Romanesque Revival structure, was dedicated in March 1872. The First Congregational Church is housed in a monumental Romanesque Revival building constructed in 1859. Its congregation has actively participated in local social reform efforts, participating in the antislavery movement in the 1840s and later supporting the temperance and civil rights movements. St. Paul's Episcopal Church was also founded in 1839. The congregation's first church building, constructed in 1840, was replaced by a Romanesque Revival building in 1853; it is one of the oldest Episcopal Church structures in southern Michigan.

Constructed in 1857, St. John's the Evangelist Church is the oldest Roman Catholic church in the city. It was established as a mission in 1836 to serve a congregation that was originally predominately Irish but has since diversified to include people of many ethnic backgrounds. St. Mary Star of the Sea was established in 1881 as Jackson's second Catholic church. The present building, a limestone Romanesque structure built between 1923–26, incorporates elements of the parish's first church as well as stained glass windows, marble altars and communion rails imported from Italy and Austria.[21]

Jackson is also home to Temple Beth Israel, a Reform synagogue founded in 1862 by German Jews.

Jackson was a major railway hub from the late nineteenth century into the mid-twentieth century, and for over a century has been known as the crossroads of Michigan.

Jackson is at the junction of Interstate Highway I-94 and US-127.

Reynolds Field at Jackson County Airport is the main airport for the city. It hosted commercial service, primarily under the North Central Airlines banner, until 1984. With the "Blue Goose" aircraft now gone, the airport today operates as a general aviation facility. The Jackson Blues Festival is held there annually.

Amtrak, the national passenger rail system, provides service to Jackson, operating its Wolverine three times daily in each direction between Chicago and Pontiac, Michigan, via Detroit. Baggage cannot be checked at this location; however, up to two suitcases in addition to any "personal items" such as briefcases, purses, laptop bags, and infant equipment are allowed on board as carry-ons.

Jackson Transit Authority operates eight routes Monday through Saturday out of a central station located downtown. Greyhound Lines provides service from the JTA station. In addition to the publicly funded JTA, there are four private taxicab companies operating in town.