Twenty Concorde aircraft were built, six for development and 14 for commercial service.

All but two of these aircraft—a remarkably high percentage for any commercial fleet—are preserved.

The two prototype aircraft were used to expand the flight envelope of the aircraft as quickly as possible and prove that the design calculations for supersonic flight were correct.

The production aircraft were different in many ways to the original aircraft necessitating re-examining certain areas to obtain certification. In all there were six "development" aircraft. The two prototypes (001/002), the two pre-production (101/102) and two production aircraft (201/202)

Concorde G-BOAB in storage at London (Heathrow) Airport, following the end of all Concorde flights

Concorde G-BOAG at the Museum of Flight. 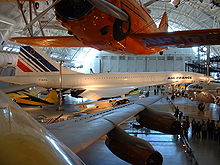