Concordia University Texas is a private, coeducational institution of liberal arts and sciences located in northwest Austin. The university offers undergraduate and graduate degrees as well as an Accelerated Degree Program for part-time students and adult returning students at satellite campuses in San Antonio, Houston, and Fort Worth.

Concordia University Texas is under the auspices of the Lutheran Church-Missouri Synod and is a member of the Concordia University System, the ten-member association of LCMS colleges and universities enrolling a total of 22,000 students nationwide. As a Lutheran university, Concordia's stated[citation needed] mission is to develop Christian leaders.

Concordia was founded in 1926 as Lutheran Concordia College of Texas, a four-year high school that prepared young men for careers in ministry and teaching. The school opened with 26 students on its original site along East Avenue (now Interstate 35) on the then northern outskirts of Austin, Texas. In 1929, a two-story classroom building, later called the Music Building and now known as College Central, was built.

Concordia was founded by members of Texas's Wendish immigrant community. The original main building, Kilian Hall, is named for the Wend John Kilian, founder of the first Texas Lutheran church associated with the Missouri Synod and leader of a large group of Wends (also called Sorbs) who settled in the Serbin area. Today, between 10 and 15% of Concordia's faculty, staff, and students are of Wendish heritage.

Throughout the 1940s and 1950s many buildings were added to the campus, such as Hirschi Memorial Library in 1949 and Kramer Hall, the college's first fully air-conditioned classroom building, in 1951. Also in 1951, Concordia started using a two-year junior college curriculum. 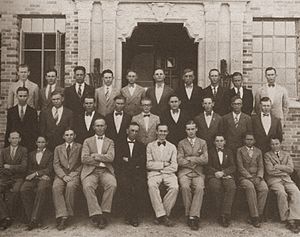 Old photograph of Concordia faculty in front of Kilian Hall.

Building developments on campus continued throughout the 1950s and 1960s. The campus built its chapel, named Birkmann Memorial Chapel, in 1952. Texas Hall, which housed dining services and faculty offices was dedicated in 1953. Studtmann Hall, an all-girls dormitory opened in 1955. The first Beto Hall on the Concordia campus was built in 1969 and housed science labs. In the early 21st century, this building was converted into the school's mail services facility.

In 1955 Concordia admitted women as students for the first time and the institution changed its name to Concordia Lutheran College in 1965. In 1969, the four-year high school program was disbanded and Concordia’s curriculum expanded to four years after receiving permission to award Bachelor of Arts degrees in 1980.

Concordia joined the Concordia University System (CUS) in 1993. The CUS represents the ten universities and two seminaries run by the Lutheran Church Missouri Synod. In 1995, under the leadership of President Rev. Dr. David Zersen, the name of the institution was changed to Concordia University at Austin after joining the Concordia University System, which includes 10 colleges and universities across the U.S. The Accelerated Degree Program (ADP), with sites in Austin, Ft. Worth, Houston and San Antonio, within the College of Adult Education, was launched in 1995 to offer working adults the opportunity to earn a degree. Harms Hall, a dormitory, opened in January 2000 more than doubling campus resident capacity.The first Graduate program was developed during this period.

In 2002, Dr. Thomas E. Cedel, a former fighter pilot and Colonel in the United States Air Force was named President of Concordia University at Austin.

In August 2008, Concordia University relocated its primary campus, moving onto over 389 acres (157 ha) in Northwest Austin. The City of Austin allowed for the demolition of the former campus.[3] A developer bought the space with plans to construct a mixed-use development. The developer filed for bankruptcy in 2011. [4][5]

In 2005, the Board of Regents approved the relocation of the Concordia University Texas campus. Since its founding the school has occupied a 23-acre (9.3 ha) campus near downtown Austin. The new campus is located in Northwest Austin on more than 380 acres (150 ha) of land. Construction began in the spring of 2007, and the new campus opened in September 2008. 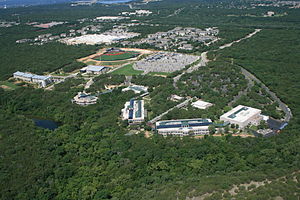 Three new structures were built prior to occupation of the new Concordia campus: student housing, a fieldhouse, and a front entry/guard house. In addition to the new structures, additional parking—to the tune of more than 600 spaces—as well as new roads were built to handle the increased traffic on the campus.

The campus includes a 225-acre (91 ha) nature preserve that has wetlands, caves, dense trees and wildlife, and is home to the Golden-cheeked warbler, a rare species of bird native to Central Texas. A 10-A Federal permit is required and only one other higher education institution carries one.

The inclusion of a nature preserve will allow Concordia to devote time to urban environmentalism in the Austin community.

Concordia University Texas offers 21 undergraduate and 2 graduate degrees in majors in the colleges of business, education, liberal arts, and science.

Concordia is accredited by the Commission on Colleges of the Southern Association of College and Schools [6]. 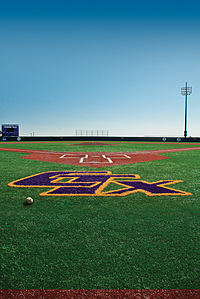 There had been relatively little athletic tradition with the exception of the baseball program which has been regionally and sometimes nationally recognized. In spring 2011, "Purple Out" events were started to encourage students, staff, and the community to support athletics. On designated "Purple Out" days, everyone is encouraged to wear purple and those attending a sporting event receive purple "Tornado Towels".

The Concordia Men's basketball team has been coached by Stanley Bonewitz Jr. since 2004. He is a former Texas Tech basketball standout. As a player, he was named Texas "Mr. Basketball" in 1995 [7] His father, Stanley Bonewitz Sr., recently retired as a state-championship winning coach at East Central High School in San Antonio.

The Concordia Men's baseball team is coached by former major leaguer Tommy Boggs. Coach Boggs led the team to victory in 2011 as the ASC west division conference champions, and later to the NCAA championship tournament where they fell two games short of advancing to the College World Series. Prior to Boggs tenture, Mike Gardner was head coach since 1998. He retired at the end of the 2009 season as the winningest coach in school baseball history.[8] Tornado field debuted on the new campus in February 2011 and was dedicated in April 2011. It is home to Tornado Baseball.

Chris Randle became the first student athlete from Concordia to qualify for the NCAA track and field championship tournament. His 6-foot-7-inch (201 cm) high jump earned him a 6th place finish in the tournament. Randle's participation marked the first time in school history that Concordia was represented at the NCAA Division III Championships in two sports during the same academic year, as the baseball team won the ASC title and won two games over nationally-ranked opponents – Linfield and Redlands – at the West Regional.

In 2009 Concordia inducted its first ever Hall of Fame class, including the 2002 baseball team that played for the NCAA Division III College World Series and Atlanta Braves reliever Scott Linebrink.