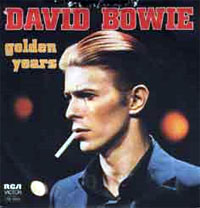 "Golden Years" is a song written by in 1975. It was originally released as a shortened single in November 1975, and in its full-length version in January the following year on the "" album. It was the first track completed during the "Station to Station" sessions, a period when Bowie's addiction was at its peak.

When it first appeared as a single in 1975, "Golden Years" presented a somewhat skewed view of the forthcoming album, being more similar in style to the "Young Americans" /soul material from earlier in 1975 than the rest of "Station to Station", which foreshadowed the -influenced Euro-centric and electronic music that Bowie would move into with his late-1970s ''.

Bowie was looking to emulate something of the glitzy nostalgia of "", which he was playing on piano in the studio, when he came up with "Golden Years". He has said that he offered it to to perform, but that Presley declined it.

Bowie allegedly got drunk to perform the song for the American TV show ""; at the time he was one of the few white artists to appear on the programme.