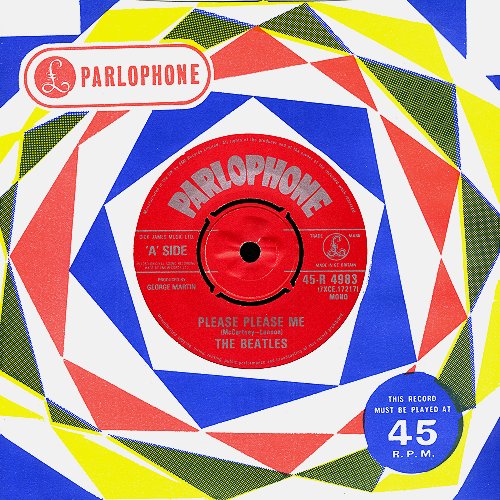 "Please Please Me" is the second single released by the in the UK, and the first to be issued in the US. It was also the title track of their first LP, which was recorded to capitalise on the success of the single.

It has long been a point of contention as to whether the song should be regarded as the Beatles' first #1. At the time there were several record charts published in the UK, and the song reached #1 on all of them except "" - whose charts are those now used historically by .

The single, as initially released with "" on the , failed to make much impact in the U.S., but when re-released there on (this time with "" on the B-side) it reached #3 in the US Hot 100.

The Beatles had secured a minor debut success with "", but outside of and the Beatles were still virtually unknown. Part of the problem was that the group were committed to begin what was to be their last Hamburg season just as "Love Me Do" entered the British charts, and so were unable to actively promote it on their home soil.

John Lennon first conceived "Please Please Me" as a bluesy, slow tempo song. Lennon recalled: "I remember the day I wrote it, I heard doing "Only The Lonely," or something. And I was also always intrigued by the words to a song that went, "Please lend a little ear to my pleas". The double use of the word "please". So it was a combination of Roy Orbison and Bing Crosby".

Lennon's harmonica playing features prominently and, similar to other early Beatles compositions such as "Love Me Do" and "From Me to You", opens the song. Paul McCartney and John Lennon initially share the vocals with McCartney holding a high note while Lennon drops down through the scale, a ploy they learnt from the UK hit song "Cathy's Clown" (April 1960).

*If one were to accept "Record Retailer's" chart positions for "Please, Please Me" and "How Do You Do It?", then Martin's instincts for a number one were absolutely correct, the former reaching number two and the latter number one.

*There are three different mixes of the song, two in mono and one in stereo. The mono mix that appears on the single is not the same as the "Please Please Me" album mix, as extra echo was added to the LP version. A new mix was performed for the stereo version of the album, and on Martin made one created from original takes 16, 17 and 18. This stereo version has Lennon fluffing the final verse, causing him to sing 'come on' with a slight chuckle in his voice.

*It was credited to Paul McCartney and John Lennon, as were all other originals on the "Please Please Me" album. The songwriting credit was changed to the more familiar "Lennon-McCartney" for their second album, "".

, EMI's United States label, was offered the right to release "Please Please Me" in the U.S., but turned it down.

, a on WLS in Chicago and a friend of Vee-Jay executive Ewart Abner, played the song on the radio, perhaps as early as , , thus becoming the first DJ to play a Beatles record in the United States.

The first pressings of the Vee-Jay single, which was assigned the catalog number 498, featured a typographical error: The band's name was spelled "The Beattles" with two T's..

In the wake of the rush-release of "" in the United States, Vee-Jay reissued "Please Please Me" on or about , , after footage of the Beatles had appeared on a television program hosted by .

Because Vee-Jay wanted to get as many copies of the record pressed as quickly as possible, it did not insist on uniformity from one pressing plant to another. As a result, a dizzying number of label variations exist.

At least 1.1 million copies of "Please Please Me" were sold the second time.

"Please Please Me" was chosen for the Beatles' first national TV appearance, on "Thank Your Lucky Stars" on . ["Tell Me Why" by Tim Riley, 1989, Vintage books]

"Please Please Me" is cited as the "first real oral sex pop song" in Tim Riley's 1999 book about the Beatles' discography. He credits two Beatles-era writers for the first such observation, Robert Christgau, and John Piccarella. Riley also notes the lyric's (call and responses) "c'mon, c'mon," and points out the song "closes the side [of the album] ignoring the conventional practice of putting the hit up front, and fleshing out the album with weaker material."Fact|date=February 2007