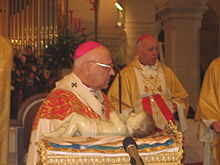 Michel Sabbah (Arabic: ميشيل صباح‎, born 19 March 1933 in Nazareth, Palestine) was the Archbishop and Latin Patriarch of Jerusalem from 1987 to 2008.

Sabbah began his priestly studies at the Latin Patriarchal Seminary of Beit Jala in October 1949 and was ordained a priest for the Latin Patriarchate of Jerusalem in June 1955. He was a parish priest for a few years before being sent to the University of St. Joseph in Beirut to study Arabic language and literature. Shortly thereafter, he became director of schools for the Latin Patriarchate. He served in that position until the Arab-Israeli war in 1967. Sabbah then moved to Djibouti to teach Arabic and Islamic studies until 1973, when he began doctoral studies in Arabic philology at the Sorbonne. In 1980, he was named President of the Bethlehem University. In 1987, Pope John Paul II appointed him Latin Patriarch of Jerusalem, making him the first native Palestinian to hold the office since centuries.

Since 1999, Sabbah has been International President of Pax Christi, a Catholic organisation promoting peace. Sabbah has also spoken in support of Palestinian rights, the two-state solution and the Palestinian refugees' right of return. He has criticized the apartheid wall and called for an end to the Israeli occupation of the Gaza Strip and West Bank including East Jerusalem.

Sabbah resigned as Patriarch on 19 March 2008, after reaching the age of 75, the age of retirement.

Sabbah is currently the Grand Prior of the chivalric Equestrian Order of the Holy Sepulchre of Jerusalem, one of the knightly orders founded in 1099.

On the 11th of December 2009 Patriarch Sabbah together with other prominent Christian Leaders launched the Kairos Document [1] in an international conference in Dar Annadwa in Bethlehem. Among the authors of this historical document, Bishop Munib Younan, Archbishop Attalah Hanna, Rev. Mitri Raheb, Rev. Naim Ateek and father Jamal Khader. The coordinator and the spoke person of the Kairos group is Rifat Odeh Kassis the President of the International Executive Council of Defense for Children International and the General Director of its section in Palestine.