A diffractometer (pronunciation: di-"frak-'tä-m&-t&r) is a measuring instrument for analyzing the structure of a material from the scattering pattern produced when a beam of radiation or particles (such as X-rays or neutrons) interacts with it.

Because it is relatively easy to use electrons or neutrons having wavelengths smaller than a nanometer, electrons and neutrons may be used to study crystal structure in a manner very similar to X-ray diffraction. Electrons do not penetrate as deeply into matter as X-rays, hence electron diffraction reveals structure near the surface; neutrons do penetrate easily and have an advantage that they possess an intrinsic magnetic moment that causes them to interact differently with atoms having different alignments of their magnetic moments. 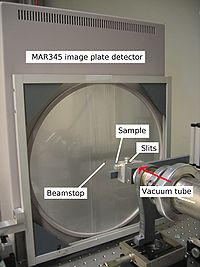 The detector end of a simple x-ray diffractometer with an area detector. The direction of the x rays is indicated with the red arrow.

A typical diffractometer consists of a source of radiation, a monochromator to choose the wavelength, slits to adjust the shape of the beam, a sample and a detector. In a more complicated apparatus also a goniometer can be used for fine adjustment of the sample and the detector positions. When an area detector is used to monitor the diffracted radiation a beamstop is usually needed to stop the intense primary beam that has not been diffracted by the sample. Otherwise the detector might be damaged. Usually the beamstop can be completely impenetrable to the x rays or it may be semitransparent. The use of semitransparent beamstop allows the possibility to determine how much the sample absorbs the radiation using the intensity observed through the beamstop.