Granulation tissue
Not to be confused with Granuloma.
"Proud flesh" redirects here. For other uses, see Proud Flesh (disambiguation).

Granulation tissue is the perfused, fibrous connective tissue that replaces a fibrin clot in healing wounds. Granulation tissue typically grows from the base of a wound and is able to fill wounds of almost any size it heals. In addition, it is also found in ulcers like oesophageal ulcer. 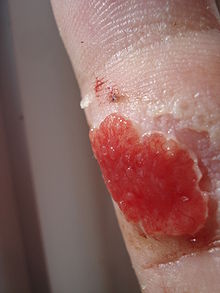 Example of granulation tissue from a cut on a finger with "proud flesh".

During the proliferative phase of wound healing, granulation tissue is:

Granulation tissue is composed of tissue matrix supporting a variety of cell types, most of which can be associated with one of the following functions:

An excess of granulation tissue (caro luxurians) is informally referred to as "proud flesh."[1]

The extracellular matrix of granulation tissue is created and modified by fibroblasts. Initially, it consists of a network of Type III collagen, a weaker form of the structural protein that can be produced rapidly. This is later replaced by the stronger, long-stranded Type I collagen, as evidenced in scar tissue.

The main immune cells active in the tissue are macrophages and neutrophils, although other leukocytes are also present. These work to phagocytize old or damaged tissue, and protect the healing tissue from pathogenic infection. This is necessary both to aid the healing process and to protect against invading pathogens, as the wound often does not have an effective skin barrier to act as a first line of defense.

It is necessary for a network of blood vessels to be established as soon as possible to provide the growing tissue with nutrients, to take away cellular wastes, and transport new leukocytes to the area. Fibroblasts, the main cells that deposit granulation tissue, depend on oxygen to proliferate and lay down the new extracellular matrix.

In vascularisation, also called angiogenesis, endothelial cells quickly grow into the tissue from older, intact blood vessels. These branch out in a systematic way, forming anastomoses with other vessels.

Approximate times of the different phases of wound healing,[2] with substantial variation depending on wound size and healing conditions. Granulation tissue formation is seen in green box at days to weeks.