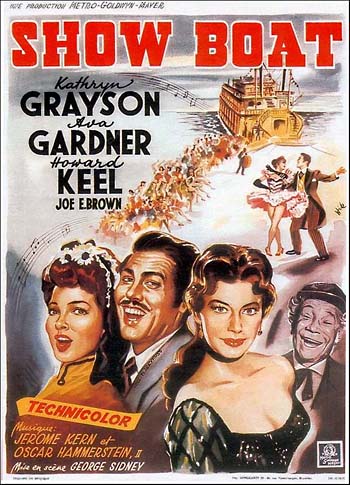 Filmed previously in 1936, the Kern-Hammerstein "Show Boat" was remade in 1951 by in Technicolor, starring , , and , with Joe E. Brown, , , , , and . The film was the first screen version of "Show Boat" not to include any of the actors who had appeared in the original 1927 stage production (if one does not count "" as a film version of "Show Boat").

It was adapted by after and George Wells had turned in two discarded screenplays, and was directed by . Filmed in the typical MGM lavish style, this version is the most financially successful of the film adaptations of the play, and is one of MGM's most popular musicals, though arguably one of the studio's less inventive ones. It was the first film version of "Show Boat" not to feature Robert Russell Bennett's stage orchestrations in one form or another (the orchestrations in this film were done by , , and the uncredited Robert Franklyn).

Oscar Hammerstein II's dialogue was almost completely rewritten (by Mahin), the story was given a major overhaul near the end of the film and the changes are considered to make this version of the story quite distinct from other versions. Changes included keeping the characters of Magnolia and Gaylord significantly younger at the end than in the play, and the expansion of the role of Julie to give her character greater depth. Kim (Magnolia and Ravenal's daughter) appears only as a baby and a little girl in this version.

Nearly all of the purely comic scenes were removed, as much of the comedy in the show has no direct bearing on the plot. This left (as Cap'n Andy) and (as Parthy) with far less to do than they would otherwise have had, and turned the characters of Frank and Ellie (played by Gower and Marge Champion) into a relatively serious song-and-dance team rather than a comic team who happened to dance.

The role of ship's pilot Windy McClain, already brief to begin with, was reduced to just three lines in the film. (In the 1951 "Show Boat", it is Magnolia, not Windy, who defends Julie and her husband Steve when the sheriff arrives to arrest them.)

The version of "Ol' Man River" heard here is considered by film historians to be by far the best moment, both musically and pictorially, in the film. Musical theatre historian Miles Kreuger, who had many harsh words for the 1951 "Show Boat" in his 1977 book "Show Boat: The History of a Classic American Musical" nevertheless had nothing but high praise for this sequence. It was staged and directed by an uncredited during an illness of George Sidney, who directed the rest of the film. However, the "Ol' Man River" sequence in the 1936 film version of the show, with its tracking pan around the seated, singing figure of , and its expressionistic montages of field and dock workers performing their tasks, is perhaps even more highly regarded.

The aspects of the original stage version dealing with racial inequality, especially the story line concerning miscegenation, were highly "sanitized" and deemphasized in the 1951 film:

*During the miscegenation scene (in which Julie's husband is supposed to suck blood from her hand so that he can truthfully claim that he has "Negro" blood in him), he is seen pricking her finger with what looks like a sewing pin and sucking it, rather than using an ominous-looking switchblade, as in the play and the 1936 film, to cut her hand with.
*The role of Queenie, the black cook, (an uncredited Frances E. Williams) has been reduced to literally a bit part, and she practically disappears from the story after the first ten minutes, unlike the character in all stage versions and in the film version. The role of Joe the (played by the then-unknown William Warfield) is also substantially reduced in the 1951 film, especially in comparison to Paul Robeson, whose screen time playing the same role in the 1936 film had been markedly increased because he was now a major star.
*In the 1936 "Show Boat", as well as the stage version, Queenie remarks that it is strange to hear Julie singing "" because only black people know the song, thereby foreshadowing the revelation of Julie's mixed blood. This remark is completely left out of the MGM version.
* Some of the more controversial lines of the song "Ol' Man River" are no longer heard, and Queenie and Joe do not sing their section of "Can't Help Lovin' Dat Man", as they do in all stage versions and in the 1936 film.
*There is no African-American chorus in the 1951 version, and the levee workers are not seen nearly as much in the 1951 film as in the 1936 one. An offscreen, "disembodied" chorus is heard during "Ol' Man River", instead of the usual group of dock workers who are supposed to accompany deckhand Joe in the song. (The same type of chorus is heard later, in a choral reprise of "Make Believe" accompanying a montage which shows the increasing success of Magnolia and Ravenal as actors on the boat, and again at the end of the movie, in Warfield's final reprise of "Ol' Man River".)

The 1951 movie is also extremely glossy, smoothing over the poverty depicted more tellingly in the 1936 version, and despite some (brief) actual location shooting (primarily in the opening shots of townspeople reacting to the show boat's arrival), the film does not give a very strong feeling of authenticity. was originally to have played Julie (after and were passed over) as she had in the brief segment of the play featured in the 1946 Jerome Kern biopic "Till the Clouds Roll By". But studio executives were nervous about casting a glamorous black actress in one of the lead roles, so Gardner was chosen instead. Gardner's singing voice was later dubbed by vocalist ; her original rendition of one of the musical numbers appeared in the compilation film "" and is considered by some to be superior to the version used in the film. Gardner's vocals were included on the album for the movie, and in an autobiography written not long before her death, Gardner reported she was still receiving royalties from the release.

Eleven numbers from the stage score were sung in this film. As in all productions of the musical, the song "After the Ball" was again interpolated into the story, but "Goodbye My Lady Love", another regular interpolation into the show, was omitted from this film version. Although three songs from the stage version, "I Might Fall Back on You", "Why Do I Love You?" , and "Life Upon the Wicked Stage" were brought back to the score after having been omitted from the 1936 film, there were still several major musical differences from the original play in this 1951 version:

* The opening song, "Cotton Blossom", rather than being sung by the black chorus and by the townspeople who witness the show boat's arrival, was sung by a group of singers and dancers in flashy costumes filing out of the boat. This required the omission of half the song, plus a small change in the song's remaining lyrics.

* "Ol' Man River", instead of being sung right after "Make Believe", was moved to a later scene taking place in the pre-dawn early morning, in which Joe sadly watches Julie and her husband leave the boat because of their interracial marriage. Thus, the song became Joe's reaction to this event. In the 1951 version, it is sung only twice, rather than being sung complete once and then partially reprised several times throughout the story, as in the play and the 1936 film.

* Because of the reduction of both Joe and Queenie's roles, as well as the absence of an African-American chorus, "Can't Help Lovin' Dat Man" became a song for only Julie and Magnolia, while the deckhands relaxing on the boat provided their own instrumental accompaniment, but did not sing.

* "Life Upon the Wicked Stage", rather than being sung by Ellie to a group of worshipful fans curious about stage life, was moved to the New Year's Eve scene at the Trocadero nightclub, to be sung and danced by Ellie and Frank in the spot in which the two are originally supposed to sing "Goodbye My Lady Love".

* The little-known song "I Might Fall Back On You", another duet for Ellie and Frank, was sung as a number on the stage of the show boat, instead of as a "character song" for the two to sing outside the box office, as originally written.

* "Make Believe" is reprised by Ravenal when he returns at the end, rather than when he is saying farewell to his daughter just before he deserts her and Magnolia.

The three additional songs that Kern and Hammerstein wrote especially for the 1936 film version were not used in the 1951 movie.

(first billed only)
* as Magnolia Hawks
* as Julie LaVerne
* as Gaylord Ravenal
*Joe E. Brown as Cap'n Andy Hawks
* as Ellie Mae Shipley
* as Frank Shultz
* as Steve Baker
* as Parthy Hawks
* as Pete
* as Joe

None of the film versions of "Show Boat" have won Oscars, and only the 1951 film was nominated - for photography (), and for musical adaptation (, ). Likewise, the film "Till the Clouds Roll By" received no Oscar nominations.

As of 2008, this is the only film version of Show Boat to have been officially released on DVD (there is, as of now, only an apparently Brazilian DVD of the 1936 version). , which owns the rights to all three film versions of Show Boat, announced some time ago that they would be officially released in a remastered new set in 2008, but as of May of that year, there is still no announcement of the exact release date.