Band of the Hand (song)

Band of the Hand (song) 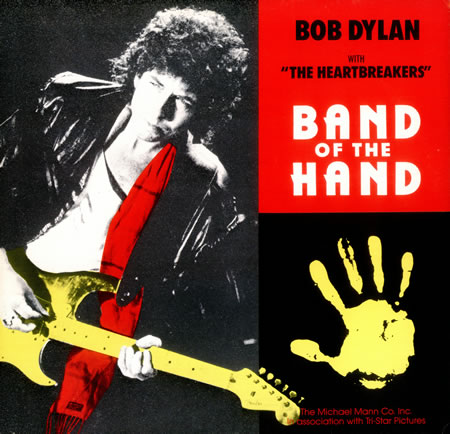 "“Band of the Hand”" is a song written and recorded by as the theme for the 1986 movie of the same name, which was directed by and produced by Michael Mann. Dylan recorded on song while on tour in , on February 9 and 10, 1986. [ [http://www.bjorner.com/DSN07660%20-%201986%20Down%20Under%20Tour.htm the Bob Dylan Recording Sessions] ] Dylan is backed on the recording by , and a group of background singers including . The recording was produced by Tom Petty. [Op. cit.]

The lyrics of the song emphasize the central theme of the movie: the ruthlessness of the vigilante justice which will be used to confront the immorality of the criminal drug world. Although the lyrics posted on Dylan’s official website indicate that the refrain for the song consists of the title, “band of the hand,” repeated four times in succession, the chorus that is sung on the recording is clearly “It’s hell time, man,” which is given as the subtitle of the song. [ [http://bobdylan.com/songs/bandhand.html Lyrics to "Band of the Hand (It's Hell Time, Man)" at BobDylan.com] ]