Double beta decay is a radioactive decay process where a nucleus releases two beta rays as a single process.

In double-beta decay, two neutrons in the nucleus are converted to protons, and two electrons and two electron antineutrinos are emitted. In the process of beta minus decay, unstable nuclei decay by converting a neutron in the nucleus to a proton and emitting an electron and an electron antineutrino. In order for beta decay to be possible, the final nucleus must have a larger binding energy than the original nucleus. For some nuclei, such as germanium-76, the nucleus with atomic number one higher has a smaller binding energy, preventing beta decay from occurring. However, the nucleus with atomic number two higher, selenium-76, has a larger binding energy, so the double-beta decay process is allowed. This process is allowed because the Q-value of the first beta reaction is less than the Q-value of the second beta reaction.

Although efforts to observe the process date back to 1948, it was not observed in a laboratory setting until 1986. Geochemical observation of the decay products (by extraction of Kr and Xe from very old Se and Te minerals) are known since 1950. Double-beta decay is the rarest known kind of radioactive decay; it has been observed for only 12 isotopes, and all of them have a mean lifetime of more than 1019 yr.

For some nuclei, the process occurs as conversion of two protons to neutrons, with emission of two electron neutrinos and absorption of two orbital electrons (double electron capture). If the mass difference between the parent and daughter atoms is more than 1.022 MeV/c2 (two electron masses), another decay branch is accessible, with capture of one orbital electron and emission of one positron. When the mass difference is more than 2.044 MeV/c2 (four electron masses), the emission of two positrons is possible. These theoretically possible double-beta decay branches have not yet been observed.

Many isotopes are, in theory, capable both of double-beta decay and other decays. In most cases, the double-beta decay is so rare as to be nearly impossible to observe against the background of other radiation. However, the double-beta decay rate of 238
U (also an alpha emitter) has been measured radiochemically; 238
Pu is produced by this type of radioactivity. Two of the nuclides (48
Ca and 96
Zr) from the list above can decay also via single beta decay but this decay is extremely suppressed and has never been observed. 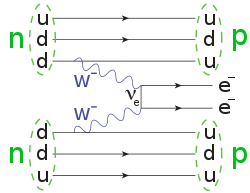 Feynman diagram of neutrinoless double-beta decay, with two neutrons decaying to two protons. The only emitted products in this process are two electrons, which can only occur if the neutrino and antineutrino are the same particle (i.e. Majorana neutrinos) so the same neutrino can be emitted and absorbed within the nucleus. In conventional double-beta decay, two antineutrinos - one arising from each W vertex - are emitted from the nucleus, in addition to the two electrons. The detection of neutrinoless double-beta decay is thus a sensitive test of whether neutrinos are Majorana particles.

The neutrinos in the above diagram are virtual particles. With only the two electrons in the final state, the total kinetic energy of the two electrons would be approximately the difference in binding energy between the initial and final state nuclei (with the recoil of the nucleus accounting for the rest of the available energy). To a very good approximation, the two electrons are emitted back-to-back to conserve momentum.

The decay rate for this process is given (approximately) by

where G is the two-body phase-space factor, M is the nuclear matrix element, and mββ is the so called effective Majorana neutrino mass given by

In this latter expression, the mi are the neutrino masses (of the ith mass eigenstate), and the Uei are elements of the Pontecorvo–Maki–Nakagawa–Sakata (PMNS) matrix. Hence the observation of neutrinoless double-beta decay, in addition to confirming the Majorana nature of the neutrino, would give information on the absolute neutrino mass scale, and potentially also on the neutrino mass hierarchy and the Majorana phases appearing in the PMNS matrix.

Numerous experiments have been carried out to search for neutrinoless double-beta decay. Some recent and proposed future experiments include:

A subgroup of the Heidelberg-Moscow collaboration led by H. V. Klapdor-Kleingrothaus published a series of controversial papers claiming to have observed neutrinoless double-beta decay in 76
Ge with statistical significance of > 99.9999998%. This claim has been criticized by many in the nuclear and particle physics communities, but Klapdor-Kleingrothaus et al. have vigorously defended their work. Their measured value of mββ between ~0.2-0.5 eV (depending on the choice of nuclear matrix element) has yet to be confirmed by other experiments.

The following lists, in chronological order, the key publications and preprints related to the claim and the criticism thereof.