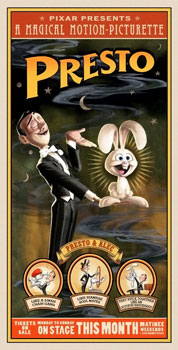 "Presto" is a 2008 computer-animated short film released in theatres with "". It was directed by veteran Pixar animator . Sweetland also provides the voices for both of the movie's characters

Turn-of-the-century magician Presto DiGiotagione (whose name is a play on the word "") is famous for a hat trick. Presto's apprentice, a rabbit named Alec Azam (a play on the magic word "alakazam"), is hungry and unhappy that he is locked in a birdcage just out of reach of a carrot.

Finally, after unintentionally entertaining the audience with his endeavors (at his very painful expense), Presto ends up falling from the ceiling with assorted heavy objects chasing him down. Alec uses the magic hats to save him, earning the audience's wild approval for both himself and Presto. As the film ends, Presto gives Alec the carrot, as well as second billing (as "Alec Azam") on the posters advertising the show.