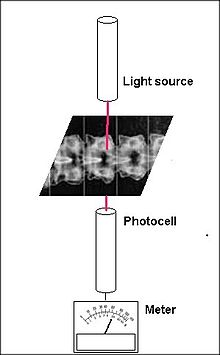 Densitometry is the quantitative measurement of optical density in light-sensitive materials, such as photographic paper or film, due to exposure to light. Optical density is a result of the darkness of a developed picture and can be expressed absolutely as the number of dark spots (i.e., silver grains in developed films) in a given area, but usually it is a relative value, expressed in a scale.

Since density is usually measured by the decrease in the amount of light which shines through a transparent film, it is also called absorptiometry, the measure of light absorption through the medium. The corresponding measuring device is called a densitometer (absorptiometer). The logarithm of the reciprocal of the transmittance is called the absorbance or density.[1]

DMax and DMin refer to the maximum and minimum density that can be recorded on the material. The difference between the two is the density range.[1] The density range is related to the exposure range (dynamic range), which is the range of light intensity that is represented by the recording, via the Hurter–Driffield curve. The dynamic range can be measured in "stops", which is the binary logarithm of the ratio of highest and lowest distinguishable exposures.

According to the principle of operation of the densitometer, one can have:

Dual energy X-ray absorptiometry is used in medicine to evaluate calcium bone density, which is altered in several diseases such as osteopenia and osteoporosis. Special devices have been developed and are in current use for clinical diagnosis, called bone densitometers.