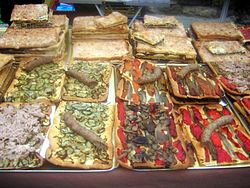 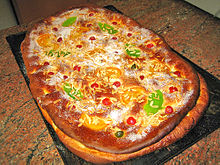 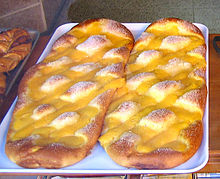 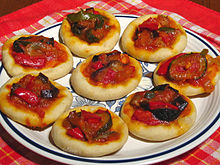 "Coca de mullader", a variety of coca with samfaina, a dish similar to ratatouille, an example of the savoury coca

"Coca de garlanda", a coca with a hole 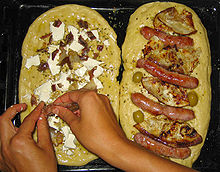 Preparing a coca with fish and a "coca de recapte", with sausages and vegetables 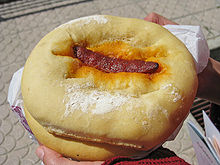 "Coca de xoriço", a savoury coca to eat at breakfast

The coca is just one way of preparing a dish traditionally made all around the Mediterranean.[5]

The Catalan word coca—plural coques—comes from Dutch during the Carolingian Empire, and shares the same roots as the English "cake" and the German "kuchen".[citation needed]

There are many diverse cocas, with four main varieties: sweet, savoury, closed and open. All of them use dough as the main ingredient, which is then decorated. This dough can be sweet or savoury. If it is sweet, eggs and sugar are added, and if it is savoury, yeast and salt. As regards the topping or filling, fish and vegetables are usual at the coast whilst inland they prefer fruit, nuts, cheese and meat.[6] Some cocas can be both sweet and savoury (typically mixing meat and fruit).

Coca is almost any kind of bread-based product. Its size can vary from 5 cm up to 1 metre. There are various presentations:

Amongst the lengthy list of varieties, the most common are:

The coca, festivities and popular culture

"Cocas are (...) strongly linked with our country’s traditions."[7] The coca is a dish common to rich and poor.[8] and a basic part of Catalan cuisine.

In Catalonia, the coca has a direct relationship with the festa or holiday.[9] It is typical to buy or prepare cocas during holidays, especially during Easter (Pasqua), Christmas (Nadal) and Saint John’s Eve (la revetlla de Sant Joan). Some cocas even have the names of saints and they are eaten on that saint’s day (such as the Saint John’s Coca, Coca de Sant Joan). Nonetheless, many eat them without any religious or festive reason, especially if we consider that in places like Italy, this dish doesn’t carry any special significance. The Coca de Recapte obeys this logic exactly, since the "recapte" is a kind of picnic habitually taken out into the fields.

Similar recipes along the Mediterranean

Coca, being the Catalan variety of a Mediterranean dish, has local counterparts all over the Mediterranean, especially in its savoury kind. Apart from Italy,[10] other countries also have similar cakes, pies and pastries. Three examples are the Pissaladière from Provence, the Lahmacun from Turkey and the Bouchée à la Reine from France. Meanwhile we[who?] can find sweet pies all over Europe. The more specific King's cake (in Catalan, Tortell de Reis) is traditional in Occitania as well as in Catalonia, Valencia, Andorra, French Catalonia and the Balearic Islands as a part of the New Year holidays.