Donald Henderson "Dan" Bain (February 14, 1874 – August 15, 1962) was a Canadian athlete and merchant. He was an all-around athlete, competing in ice hockey, roller skating, gymnastics, figure skating, golf, cycling and shooting among other sports. He was a member of the Winnipeg Victorias hockey team from 1894 until 1902 with whom he won the Stanley Cup twice as champions of Canada. He was also the national trapshooting champion in 1903. Bain was an inaugural inductee into the Hockey Hall of Fame in 1945 and was also inducted into Canada's Sports Hall of Fame, the Manitoba Hockey Hall of Fame and the Manitoba Sports Hall of Fame and Museum. He was voted Canada's top athlete of the last half of the 19th century.

He was a prominent Winnipeg businessman and community leader. He earned his fortune operating Donald H. Bain Limited, a grocery brokerage firm. Bain was an active member of numerous community associations, the president of the Winnipeg Winter Club and an avid outdoorsman. He built the Mallard Lodge, a building on the shores of Lake Winnipeg that endures today as a research facility at the University of Manitoba.

The son of Scottish immigrants, Bain was born in Belleville, Ontario, but moved with his family to Winnipeg, Manitoba, as a young child.[1] His father, James Henderson Bain, was a horse buyer for the British government and first lived in Montreal upon his arrival in Canada. His mother, Helen Miller, was a seamstress. Bain was the sixth of seven children, having four sisters and two brothers.[2]

In 1887, Bain captured the Manitoba roller skating championship at the age of 13 by winning the three-mile race.[3] He won the provincial gymnastics competition at the age of 17, and at 20, won the first of three consecutive Manitoba cycling championships.[4] Additionally, Bain was a top lacrosse player in his home province.[5] 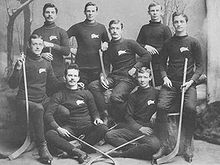 The Winnipeg Victorias posing for a photo with the Stanley Cup in 1896. Bain is in the front row, second from the left.

Bain took up ice hockey in 1895 when he answered a classified ad placed by the Winnipeg Victorias who were looking for new players.[3] Though he played with a broken stick held together by wire, he made the team after only five minutes of his tryout.[3] He quickly became a star centre and leader for the Victorias, and scored the winning goal as Winnipeg were successful in their challenge against the Montreal Victorias for the Stanley Cup in February 1896.[6] It was the first time a team outside of Quebec won the trophy.[7] The team was greeted by a huge crowd at the Canadian Pacific Railway station when their train, decorated with hockey sticks and the Union Jack, returned to Winnipeg. They were led to a feast in their honour in a parade of open sleighs as fans gathered to celebrate the championship.[3]

Bain and his teammates faced the Montreal Victorias in a return challenge in December 1896 that was described by the local press as "the greatest sporting event in the history of Winnipeg".[8] Though Bain scored two goals in the game, Montreal recaptured the Cup with a 6–5 victory.[6] The Victorias were involved in numerous further Stanley Cup challenges with Bain serving as the team's captain and manager. They again lost to their Montreal namesakes in 1898 before a record crowd of over 7,000 fans.[9] 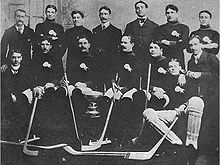 The Winnipeg Victorias posing for a photo with the Stanley Cup in 1901. Bain is in the front row, fourth from the left.

He scored four goals in three games in a 1900 challenge against the Montreal Shamrocks, but Winnipeg again lost the title.[6] The Victorias challenged the Shamrocks again in 1901 in a best-of-three series. They won the series in two games as Bain scored the clinching goal in overtime of the second game.[10] It was the first time in Stanley Cup history that the winning goal was scored in extra time.[6] He did so while playing with a broken nose that required him to wear a wooden face mask, earning the nickname "the masked man" as a result.[5] He led the Victorias to a successful defence against the Toronto Wellingtons in January 1902 before the team lost the Cup to the Montreal Hockey Club in March of that same year. He retired from hockey following the loss.

Throughout his sporting career, Bain earned medals in lacrosse, snowshoeing and was a national trapshooting champion in 1903.[3] He was an avid figure skater throughout much of his life. He won over a dozen titles, the last of which came at the age of 56, and he continued to make appearances until the age of 70.[11] He retired as a competitive athlete in 1930.[4] "I couldn't see any sense in participating in a game unless I was good. I kept at a sport just long enough to nab a championship, then I'd try something else", said Bain of his accomplishments.[3]

Bain was a well known businessman in Winnipeg. He was the president of Donald H. Bain Limited, a grocery brokerage firm headquartered in Winnipeg and operated in numerous cities.[1] It was through his firm that he amassed a large fortune.[14] He was a community leader. He helped found the old Winnipeg Winter Club on land that is now the HMCS Chippawa naval reserve division, and after World War II he organized the current Winter Club.[4] Bain was a member of many community groups and was the life governor of the Winnipeg General Hospital.[1] He was also one of Western Canada's first automobile enthusiasts and owned many British vehicles.[4]

As a result of his trap-shooting career, Bain gained an appreciation for nature. He bought an ownership share of the Portage Country Club,[14] on the Delta Marsh near the south shore of Lake Manitoba,[1] and later donated the land to Ducks Unlimited.[4] He built the Mallard Lodge as a personal retreat on land adjacent to the club. He strictly enforced his privacy, even building a road to his lodge that he allowed no one else to use. Members of the Portage Country Club were required to take a different route.[14] Bain intended to donate his lodge to the government of Manitoba for preservation, though he died before doing so. The lodge passed into the control of the government anyway, and was donated to the University of Manitoba as a research facility in 1966 that remains active today.[14] He was a member of the Manitoba Game and Fish Association and the Winnipeg Humane Society.[1]

He never married and had no children.[14] Bain was fond of his pets, in particular his Curly Coated Retriever dogs that he was said to value above human company.[14] He died August 15, 1962, in Winnipeg at the age of 88. Bain left behind an estate in excess of C$1 million, the majority of which he donated to charity and former employees.[1]