She was born Maud Dowley in South Ohio, Nova Scotia on March 7, 1903 to John and Agnes Dowley.

She suffered from disabilities as a result of juvenile rheumatoid arthritis. She began her artistic career by hand-drawing Christmas cards. These proved popular with her husband's customers as he sold fish door to door and encouraged her to begin painting. She used bright colours in her paintings and subjects were often of oxen teams, horses, or cats. All of her paintings are of outdoor scenes. Her house was one-room with a sleeping loft and is now located in the Art Gallery of Nova Scotia in Halifax. 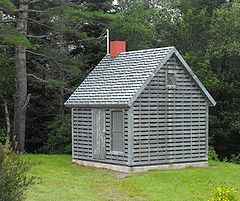 Maud married Everett Lewis, a taciturn fish peddler, on January 16, 1938 at the age of 34. They were poor and lived in a small thirteen foot six inches by twelve foot six inches house. Soon after they were married Maud Lewis accompanied her husband on his daily rounds peddling fish, bringing along Christmas cards that she had drawn. She would sell the cards for twenty five cents each. After some success with this, she started painting on various other surfaces such as pulp boards (beaverboards) , cookie sheets, and Masonite. Maud was a compulsive artist and painted on more or less every available surface in their tiny home. It was Everett who encouraged Maud to paint and he bought her her first set of oils. Lewis lived most of her life in poverty with her husband in Marshalltown.

Most of Maud Lewis' paintings are quite small - often no larger than eight by ten inches, although she is known to have done at least five paintings 24 inches by 36 inches. Maud's technique consisted of first drawing an outline and then applying paint directly out of the tube. She never mixed colours.

Early Maud Lewis paintings from the 1940s are quite rare. The AGNS does have on display occasionally the Chaplin/Wennerstrom shutters(now part of the Clearwater Fine Foods Inc. collection) . The collection comprises twenty-two exterior house shutters that Maud did in the early 1940s. The work was done for some Americans who owned a cottage on the South Shore of Nova Scotia. Most of the shutters are quite large 5 ft x 1 ft.6 inches. Maud was paid 70 cents a shutter.

Between 1945-1950, people began to stop at Maud's home and buy her paintings for two or three dollars. Only in the last three or four years of Maud's life did her paintings begin to sell for seven to ten dollars. She achieved national attention as a result of an article in the "Star Weekly" in 1964 and in 1965 she was featured on CBC-TV's Telescope. Unfortunately, her arthritis deprived her from completing many of the orders that resulted from the national exposure. In recent years, her paintings have sold at auction for ever increasing prices. Two of her paintings have sold for more than $16,000. The highest auction prices so far is $22,200.00 for lot 196 "A Family Outing". The painting was sold at a Bonham's auction in Toronto Nov 30,2009.

In the last year of her life, Maud Lewis stayed in one corner of her house, painting as often as she could while traveling back and forth to the hospital.

A large collection of Maud's work can be found in the Art Gallery of Nova Scotia, which has restored her original house and installed it in the gallery as part of a permanent Maud Lewis exhibit. Most of the Maud Lewis paintings on display are on loan to the AGNS. A steel memorial sculpture based on her house has been erected at the original site of her house in Marshalltown, Nova Scotia. An imitation Maud Lewis house has been built a private museum in Liverpool, Nova Scotia.

She died in Digby, Nova Scotia on July 30, 1970. Her husband Everett was killed when a burglar murdered him during attempted robbery at the house in 1979.

Further reading and other media