The original Maserati Ghibli is a two-door, two-seater GT released by Maserati in 1967. The V8-powered Ghibli debuted at the 1966 Turin Motor Show and proved to be the most popular Maserati vehicle since the automaker withdrew from racing in the 1950s, outselling its two biggest rivals, the Ferrari Daytona and the Lamborghini Miura. So well regarded was the Ghibli Sports Car International named it number nine on its list of Top Sports Cars of the 1960s.

The Ghibli's steel body, renowned for its low, shark-shaped nose, was designed by Giorgetto Giugiaro. Giugiaro, who today heads his own company ItalDesign, worked at coachbuilder Ghia when he designed the Ghibli.

The car was powered by a front-placed quad-cam 330 hp (250 kW) V8 engine. It had a 0-60 mph acceleration time of 6.8 seconds, had a top speed of 154 mph (248 km/h) and could be operated by either a five-speed manual or three-speed automatic transmission. Even by the standards of its time and class, the car consumed copious volumes of fuel, but Maserati fitted the car with two 50 L (13.2 US gal; 11.0 imp gal) fuel tanks,[1] which could be filled via flaps on either side of the roof pillars. The car also featured pop-up headlamps, leather sport seats and alloy wheels. 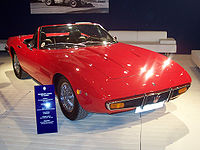 The convertible Ghibli Spyder went into production in 1969. The Spyders were relatively rare, and were outnumbered by the coupés by almost ten to one. The slightly more powerful Ghibli SS (335 hp) was released in 1970. The Ghibli went out of production in 1973 and found a successor the following year with the Bertone-designed Khamsin.

The Ghibli name was resurrected in 1992 with the release of the Maserati Ghibli II. The Ghibli II appeared with updated Maserati Biturbo engines: a 2.0 litre V6, with the highest output, for the Italian and European markets and a 2.8 litre V6 for other countries, operated via a six-speed manual transmission (early 2.8 cars have a 5 speed manual) or 4 speed automatic. The two-door, four-seater coupé was similar in appearance to Maserati Shamal, as both were an evolution of the previous Biturbo coupe. The Ghibli shows its Biturbo heritage in the doors, interior, and basic bodyshell, which were carried over from the Biturbo.

In 1994, the car was revised. A refreshed interior, new wheels, a fully adjustable electronic suspension and ABS brakes were added. Another round of improvements resulted in the Ghibli GT in 1996. It was fitted with spoked alloy 17" wheels, and had suspension and transmission modifications.

The coupe was built for luxury as well as performance. The car featured a Connolly Leather interior with burl elm trim.

The final year of production for the Ghibli II was 1997. It was replaced in the Maserati lineup by the 3200 GT the following year.

At the time the Ghibli Cup had the highest ever per litre power output of any street legal car, surpassing the Bugatti EB110, Ferrari F40 and Jaguar XJ220.

The racing version Ghibli Open Cup is highly sought after by collectors today. In 1996, the car received a modification upgrade, resulting in similar track times to those of the Ferrari 355 Challenge. After the end of the 1995 racing season, several of the original 23 cars were used in national GT events.