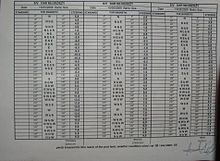 Magnetic deviation is the error induced in a compass by local magnetic fields, which must be allowed for, along with magnetic declination, if accurate bearings are to be calculated.

In nautical terminology deviation is the magnetic compass error caused by magnetised iron within the structure of the ship. Any magnet, in the proximity of a compass, will cause the compass needle to "deviate" from Magnetic North. In the case of big steel or iron structures, such as ships, this deviation error can be both large and variable. The problem of analysing and correcting the magnetic deviation error is complex - because the magnetised iron in every ship is a combination of iron particles which have become 'permanently' magnetised and iron particles which contain some "temporary" magnetism that has been induced by the Earth's magnetic field. Deviation errors vary with the ship's magnetic heading (the angle the ship makes to magnetic north).

(N.B. - Magnetic declination, also called variation, is the angular difference between true north and the direction of the Earth's magnetic field at any point on the Earth's surface. The corresponding definition, for deviation, is the angular difference between magnetic north and the compass needle. Variation and deviation both influence magnetic compass needles. Their combined effect is known as magnetic "Compass error".)

The deviation errors caused by magnetism in the ship's structure are minimised by precisely positioning small magnets and iron compensators close to the compass. However, because the magnetic "signature" of every ship changes slowly with location, and with time, it is necessary to adjust the compensating magnets, periodically, to keep the deviation errors to a practical minimum. Magnetic compass adjustment and correction is one of the subjects in the examination curriculum for a shipmaster's certificate of competency.

The sources of magnetic deviation vary from compass to compass or vehicle to vehicle. However, they are independent of location, and thus the compass can be calibrated to accommodate them.

Variations in the Earth's magnetic fields caused by variations in the Earth's crust and mantle and variations caused by mountains, iron ore deposits, etc. vary according to location, and also vary over time (conditions in the Earth's crust/mantle change over time.) Generally, they are indicated on maps, so you must take into account the declination for your current location. In the short term, these changes are predictable, and maps generally indicate the year in which the deviation was determined, and an amount to add for each subsequent year, for a period of several years. However, after that period, the predictions would become increasingly inaccurate.

Non-magnetic methods of taking bearings, such as with gyrocompass, astronomical observations, satellites (as GPS) or radio navigation, are not subject to magnetic deviation. Thus, a comparison of bearings taken with such methods with the bearing given by a compass can be used to compute local magnetic deviation.