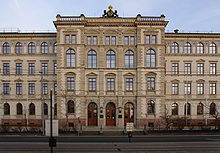 Chemnitz University of Technology is located in the town of Chemnitz in Germany. With over 10000 students it is the third largest university in Saxony and around 750 international students from 100 universities all over the world are enrolled each year. It was founded in 1836 as Royal Mercantile College ("Königliche Gewerbeschule") and became a technical university in 1986.

The tradition of science in this region goes back to the 16th century with Georg Agricola, a famous German scholar of minerals, being the city's mayor. In 1836 the Royal Mercantile College was established as a scientific base to support the industrial revolution. In 1882 more than 1,000 students registered for this College. Modern scientific areas like electrical engineering were included in the studies. These developments made it possible that the institution became a Royal Technical Academy ("Königliche Gewerbeakademie"). Especially this academy helped Chemnitz to become one of the industrial centers in the beginning 20th century. At this time Chemnitz had the highest number of patent registrations in whole Germany and hence also in the whole world.[1]

Inside the German Democratic Republic

The city of Chemnitz was heavily damaged during the World War II with corresponding results for the Technical Academy. After some time of adaptation to the new conditions the status of a Technical College ("Technische Hochschule") was awarded in 1963. At the end of the 1960s the College was composed of faculties for Mathematics, Natural Sciences, Engineering and Humanities. With the rising number of students the institution became an official University of Technology in 1986.

At the end of the German Democratic Republic the academic system of Eastern Germany was absorbed by the West German system. Chemnitz was actively supported to remain as a third university besides Leipzig and Dresden within Saxony. Therefore, in 1992 and 1993 two new departments were established: The Department of Economics and Business Administration and the School of Humanities and Social Sciences expanded the university's broad field of studies towards a full university. Immediately these new schools started to work on interdisciplinary projects with the established science and engineering departments. The university introduced combined research projects and inter-facultary study courses. Within a few years the number of students doubled to the current level of around 10,000.

The university is organised into the following 8 Departments:

The university has concentrated its research to 6 main profiles: