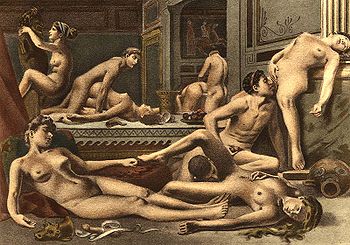 Sex parties, under various names, have been a common focus of moral panics fed by media reports claiming that such parties are prevalent, or growing in prevalence, especially among teenagers.[1]

A swinging or partner swapping party is a gathering at which both partners in a committed relationship engage in sexual activities with another couple as a recreational or social activity.[2] Swinging can take place in a number of contexts, ranging from a spontaneous sexual activity at an informal social gathering of friends to a regular social gathering.

The swinging couple can engage in a number of sexual activities. During a full swap the partners engage in penetrative sex, while in a soft swap they engage only in non-penetrative sex, such as oral sex. New swinging couples often choose a soft swap before they are comfortable with a full swap, although many couples stay soft swap for personal or safety related reasons.[3] Soft swinging occurs when the couple engage in sexual activities while two or more other couples perform sex acts in the immediate vicinity.

Key parties are a form of swinging parties, in which male partners place their car and house keys into a common bowl or bag on arriving. At the end of the evening the female partners would randomly select keys from the bowl and leave with that key's owner.[4]

A rainbow party is an urban legend spread from the early 2000s. At these events, allegedly increasingly popular among adolescents, females wearing various shades of lipstick take turns fellating males in sequence, leaving multiple colours on their penises.[5] Rainbow parties were covered on The Oprah Winfrey Show in 2003, and became the subject of a juvenile novel called Rainbow Party.[5] On May 27, 2010 the television program The Doctors discussed the topic with dozens of teens, parents, and professionals. However, sex researchers and adolescent health care professionals have found no evidence for the existence of rainbow parties, and as such attribute the spread of the stories to a moral panic.[5]

Sex parties in the media

Several stories of this type arose in the US in 2003. In New York, rumors began that teens had been taking days off from school to attend "hooky parties" while their parents were at work. One school even suspended a group of girls for allegedly skipping school to attend such a party. They were refused the right to return to school until each had submitted to a medical examination for sexually transmitted diseases and pregnancy and school officials were allowed to examine the results. The New York Civil Liberties Union filed a federal lawsuit against the school [9] on behalf of the girls and won a settlement which included monetary damages and a change in the school district's policy.[10]