An Altar Crucifix or Altar Cross is a cross placed upon an altar, and is the principal ornament of the altar.[1]

The first appearances of a cross upon the altar occurred approximately in the 6th century, although it remained unusual for several centuries, and even discouraged. When it was used, it seems to have been only during actual services, and probably a processional cross which was detatchable from its staff, and placed on the altar after processing. This would at first almost always a cross rather than a true crucifix; these began to be made specifically for altars in the late 11th century,[2] and became more common from the 12th century, though they may have been expensive at first. By the start of the 13th century, treatises by Pope Innocent III expect there to be a cross between two candles on the altar during the mass.[3] This period was also the era when candlesticks, also probably carried in procession at the start of a service, started appearing upon altars instead of nearby, and as such marked a rather large evolution in the adornment of altars. Around the 14th century, altar crosses were almost universally replaced by crucifices, probably now affordable by all churches, however, it was not until the Roman Missal of Pius V in 1570 that there is any mention of an obligation to have the crucifix on the altar.

Early Christians were not accustomed to publicly expose the cross or crucifix due to fear of subjecting it to the insults of pagans or scandalizing the weak. To avoid this, they often used symbols like the anchor or trident. 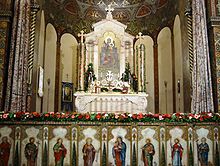 Altar with crucifix in the Armenian cathedral in Echmiatsin.

The crucifix placed upon the altar is intended to serve as a reminder to the people in attendance and the celebrant of the believed nature of the Eucharist as the actual body of Christ; the altar itself symbolically represents Golgotha. It is for this reason that Roman Law decrees it necessary to have the crucifix upon the altar whenever Mass is celebrated. Specifically, it is placed directly in between the Candlesticks in such a way that it is conveniently seen by the people. In some cases, to better fulfill this requirement, the crucifix is instead hung on the wall behind the altar, so that when the priest is facing the congregation the crucifix is not obstructed. In some churches the crucifix is suspended mid-air via strong, nearly invisible metal cords, directly above the altar itself.

While the crucifix is demanded to be upon or at least near the altar at all times, during the period of time from the first Vespers of Passion Sunday to the unveiling of the cross on Good Friday it is expected to be covered with a violet veil, except for the High Mass on the altar, when the veil is white, and Good Friday, when the veil is usually black. After Good Friday, until Holy Saturday it is necessary for all, including the bishop, the canons of the cathedral, and the celebrant to genuflect to the crucifix, which is in contrast to any other time of the year when the aforementioned are not required to genuflect.

In many of the mainline Protestant denominations, such as the Lutheran and United Methodist,[4][5] also have altar crosses; usually a cross without the body of Jesus Christ, as Protestantism to be more austere when it comes to use of religious imagery.[6] These crosses are traditionally, but not always, brought in as processional crosses at the beginning of the religious service and placed at the altar in the sanctuary.[7] When approaching the altar, the acolyte is to bow at the cross to show respect toward the Lord.