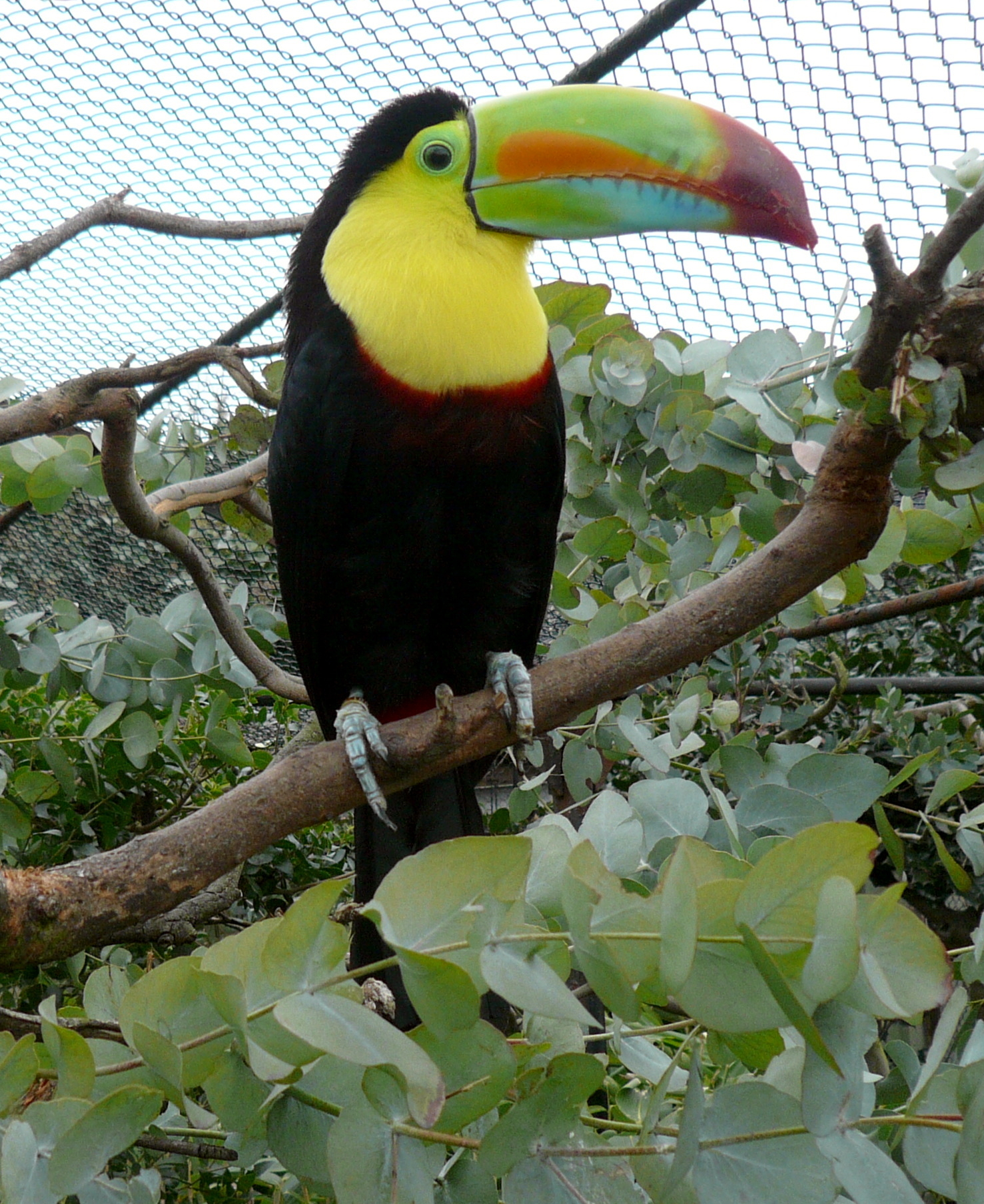 The Keel-billed Toucan ("Ramphastos sulfuratus"), also known as Sulfur-breasted Toucan, Rainbow-billed Toucan, is a colorful n with a large bill. It is the national bird of . [: [http://www.belize.gov.bz/ab_symbols.html About Belize - National Symbols] . Retrieved 2007-02-08.]

Including its bill, the Keel-billed Toucans ranges in length from around 17 to 22 inches (42-55 cm). [Skutch (1971)] Their large and colorful bill averages around 5-6 in (12-15 cm), about one-third of its length. While the bill seems large and cumbersome, it is in fact a spongy, hollow bone covered in , a very light and hard protein.

The plumage of the Keel-billed Toucan is mainly black with a yellow neck and chest. Molting occurs once per year.

The Keel-billed Toucan can be found from Southern to and . It roosts in the canopies of tropical, subtropical, and lowland rainforests, up to altitudes of 1,900 m. [Strewe & Navarro (2004)] It roosts in holes in trees, often with several other toucans. This can be very cramped, so the birds tuck their tails and beaks under their bodies to conserve space while sleeping. Adding to the lack of space, the bottoms of the holes are often covered with pits from the fruit the toucans have eaten.

Like many toucans, Keel-billed is a very social bird, rarely seen alone. It travels in small flocks of approximately six to twelve individuals through lowland s; it is a poor flyer, and moves mostly by hopping through trees. It has a family structure within the group. Birds will often "duel" with each other using their bills, and throw fruit into each other's mouths. As mentioned before, Keel-billed Toucans live together in these groups, often sharing cramped living quarters of holes in trees. Able to utiliuze human-altered to some extent, [Foster (2007)] this widespread bird is considered to be a Species of Least Concern by the .

The diet of Keel-billed Toucans consists mostly of a wide range of , [E.g. "" () and ("Bursera simaruba"): Van Tyne (1929), Foster (2007).] but may also include bird eggs, , , and tree frogs. The bill, surprisingly dexterous, allows this toucan to utilize a large variety of fruit that might not otherwise be reached. When eating the fruit, the it uses its bill to pick the fruit, and then tosses its head back to swallow the fruit whole.

The female Keel-billed Toucan will usually lay a clutch of two to four (rarely one) white eggs. The male and female share in the caring of the eggs, both taking turns incubating. The eggs hatch approximately 15-20 days after being laid. After hatching, the male and female again take turns feeding the chicks. When the chicks hatch, they have no feathers, and have their eyes closed for approximately three weeks. The chicks have adequately formed heel pads, which assist on the pit-covered bottom of the nest. The chicks stay in their nest for approximately eight to nine weeks while their bills develop fully and they become ready to fly.

The Keel-billed Toucan is sometimes kept in captivity, but has a high fruit diet and is sensitive to (an iron storage disease).Fact|date=July 2008