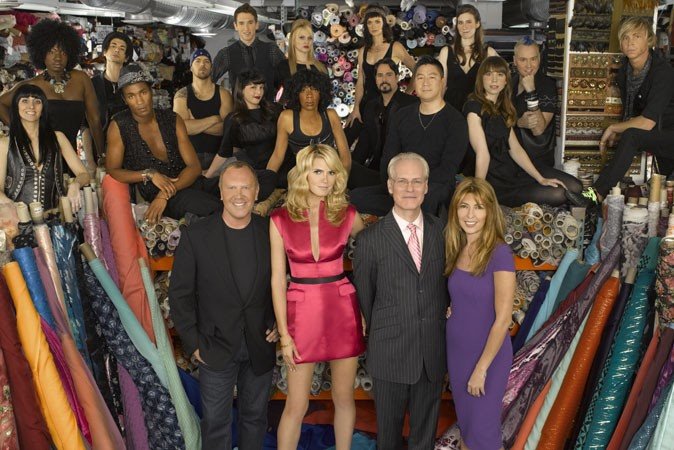 "Project Runway" season 5 began filming the first week of June 2008 and premiered , at 9:00 p.m. [ [http://featuresblogs.chicagotribune.com/entertainment_tv/2008/06/project-runway.html ChicagoTribune.com] Accessed on June 9, 2008] It will be the final season of "" to air on Bravo, due to its future movement to Lifetime. [ [http://www.nytimes.com/2008/04/07/business/media/07cnd-runway.html?ex=1208232000&en=a3f4b30ac193bcda&ei=5070&emc=eta1 NYTimes.com] Accessed on April 7, 2008] It is also the last season being filmed in ; beginning in season 6, the series will be filmed in . *Note: As of September 26, 2008, New York State Supreme Court Judge Richard Lowe has granted NBC Universal a preliminary injunction that bars the Weinstein Co. from moving Project Runway from Bravo, owned by NBCU, to Lifetime next January. In addition, there is speculation that it will not move to Los Angeles either.*

Returning as judges are supermodel , fashion designer , and "Elle" editor-at-large . returns as a mentor to the aspiring designers.

The final six designers all produced collections for . [ [http://www.advocate.com/news_detail_ektid61323.asp Advocate.com] Accessed on September 12, 2008] The winner of this season of Project Runway will get an editorial feature in an issue of Magazine, a cash prize of $100,000 from hair care to start their own line, the opportunity to sell a fashion line on Bluefly.com, and a brand new 2009 Hybrid.

fnb|2Instead of winning immunity for this challenge, Keith's design will be worn by on the second season of .

fnb|3Instead of winning immunity for this challenge, Leanne's design was manufactured and sold to cardholders.

fnb|4From this challenge onward, immunity was no longer given to the winners of each challenge.

fnb|2Germaine was originally eliminated, but was brought back after Shannone withdrew from the competition.

fnb|3Due to the number of designers eliminated in the previous two episodes, the remaining designers were allowed to re-pick their models for this challenge.

fnb|4 Karalyn, Shannone, Polina and Alex were used in this challenge to show off the designers' bridesmaid dresses. However, they will not be in contention for the finale win.

Episode summaries are available on the official website of the series. [ [http://www.bravotv.com/Project_Runway/season/5/episodes/index.php bravotv.com] Accessed on July 16, 2008]

Episode 1: Let's Start from the Beginning

Repeating the first challenge on , the designers were asked to create a look using only materials purchased from a grocery store. The designers were given 30 minutes and $75 to shop for items, and then one day to complete the outfit. Most designers were criticized by mentor Tim Gunn for utilizing fabric-substitutes such as tablecloths in their looks, which wasn't what the challenge was about. The winner received immunity for the next challenge.

The designers were asked to create a cocktail dress with their models as their clients. They were asked to use environmentally friendly or conscious fabrics from MOOD, with their models doing the fabric selections without their consultations. They were given $75 and one day to finish their garments. The winner did not receive immunity, but did get to sell their garment on .
*Judges: , ,
*Guest Judge:
*WINNER: Suede
*OUT: Wesley
*First Aired: ,

The designers were tasked to create a look of their choice inspired by the vibrant of . drove the designers around the city via a sightseeing tour bus, then provided them with digital cameras to take photographs of their inspiration. Four groups of designers were dropped off at different stops and had an hour to take their photos. They were given $100 and one day to complete their design. The winner received immunity for the next challenge.

The four groups and their assigned stopovers are as follows::*Suede, Daniel, Leanne, and Jennifer at .:*Blayne, Keith, Stella, and Kenley at .:*Korto, Joe, and Kelli at the .:*Terri, Jerell, and Emily at .

The designers were brought to the Armory Track and Field Training Center by their mentor, , and were introduced to U.S. Olympian and , . Their next challenge was to design a womenswear look for the 2008 Summer Olympics Opening Ceremonies. They were given 30 minutes to sketch and draw inspiration from the National Track and Field Museum, after which they were given $150 and one day to complete their designs. The winner received immunity for the next challenge.

Episode 5: Welcome to the Jungle

Working in teams of two, designers were asked to make an outfit that could transition from day to night, for Brooke Shields's character Wendy Healy on the television show "". The winning design will be worn by Brooke on Season 2 of "Lipstick Jungle". Each team was given a budget of $150 and one day to complete their designs. After sketching individually for thirty minutes and pitching their ideas to Shields, six designers were picked by Brooke as team leaders (team leaders shown in bold below). The team leaders were picked in a random order and selected a teammate.

The winner "did not" receive immunity for the next challenge.

Episode 7: Fashion That Drives You

The designers were required to make an outfit made entirely out of the spare parts and raw materials from a Saturn hybrid car. They were told to walk to 142 West 31st Street in Manhattan. After taking an elevator to the roof of the building, they were instructed to collect as much of the recycled car parts from within the parked Saturn vehicles. They had four minutes to collect the materials and one day to complete their outfits. The winner received immunity for the next challenge.

The designers were taken to the and brought to the offices and design showroom of living fashion legend and current CFDA president, designer . Their challenge was to create a look for her Fall 2008 collection inspired by the movie, "", starring screen legend, . They were given free rein and 15 minutes inside Diane von Furstenburg's fabric sample room to select fabrics for their designs. The winning garment will be produced in limited quantities and exclusively sold to cardholders, with proceeds going to the CFDA Foundation. The winner "did not" receive immunity for the next challenge.

The designers team up in pairs with eliminated designers to create an avant-garde garment around one of the two astrological signs of their group. They had one day and 8 hours to complete the look. The night before the runway, they were brought to the in New York. There the designers were greeted with surprise guest appearances of former Project Runway designers and winners , Alison Kelly, , Robert Plotkin, , , & Carmen Webber, who all voted on a winning look. This episode featured a surprise double elimination & the winner no longer had the advantage of immunity going forward.

The designers are assigned recent college graduates and are given the task of giving them a fashion makeover to help them enter the workforce. Each designer was to gear their look to their client's specific profession, whilst keeping their style and pleasing both the clients and their mothers. The clients wore the outfits down the runway; the models were not used in this challenge.

The designers are given the task of designing for each other. The looks were to be inspired by different genres of music. The designers wore their outfits down the runway; the models were not used for this challenge.

Drawing inspiration from nature, the remaining designers head to the to design an evening gown.

*Judges: , ,
*Guest Judge:
*WINNER: Jerell
*OUT: None: (However, all four are on the elimination block when the final three are determined in the next episode).
*First Aired: ,

The designers are given the task, prior to leaving to create their collections, of creating a wedding dress for their collections. In addition to the wedding dress, they will also be judged on an 11th look, a bridesmaid dress to go with it. This is the first time that all of the finalists are of the same gender (female).
*Judges: , ,
*FINALISTS: Kenley, Korto, and Leanne
*OUT: Jerell
*First Aired: ,