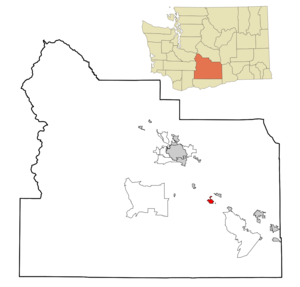 The General Allotment Act of 1887 granted an 80 acre allotment of land to a woman of half Indian ancestry, Josephine Bowser Lillie, known as “The Mother of Toppenish”. Lillie platted the north 40 acres of her land and these tracts became the first deeded land to be sold on the Yakama Indian Reservation.

Prior to the act’s implementation, all territory set aside by the Treaty of 1855 was in the name of the tribe. None of the land was individually owned. The treaty of 1855 between the United States government, representatives from thirteen other bands, tribes, and Chief Kamiakin resulted in the Yakama Nation relinquishing convert|16920|sqmi|km2 of their homeland. Prior to ceding their land, the area was inhabited solely by Native Americans. The only white pioneers before the coming of the railroad in 1883 were ranchers from older settlements bordering the Columbia River.

Sources cite the city’s name of Toppenish derives from an Indian word “Xuupinish” meaning sloping and spreading. While another source contends it is a derivative of the word “Thappahnish” which translates to “People of the trail that comes from the foot of the hills.”

Ensconced in the heart of the Yakima Valley in Washington State, the city lies inside the boundaries of the Yakima Nation’s Reservation. Toppenish was officially incorporated on , and founded by Johnny Barnes.

There were 2,275 households out of which 52.1% had children under the age of 18 living with them, 59.1% were married couples living together, 16.3% had a female householder with no husband present, and 17.6% were non-families. 14.4% of all households were made up of individuals and 7.1% had someone living alone who was 65 years of age or older. The average household size was 3.88 and the average family size was 4.26.