Merkel cell polyomavirus (MCV or MCPyV) was first described in January 2008.[1] MCV is one of seven known human tumor viruses. It is suspected to cause the majority of cases of Merkel cell carcinoma, a rare but aggressive form of skin cancer. Approximately 80% of Merkel cell carcinoma (MCC) tumors have been found to be infected with MCV. MCV appears to be a common—if not universal—infection of older children and adults.[2][3] It is found in respiratory secretions suggesting that it may be transmitted by a respiratory route.[4][5] Most MCV viruses found in MCC tumors, however, have at least two mutations that render the virus nontransmissible: 1) The virus is integrated into the host genome in a monoclonal fashion and 2) The viral T antigen has truncation mutations that leave the T antigen unable to initiate DNA replication needed to propagate the virus.[6]

Evidence that MCV is the cause of MCC tumors that are infected with the virus comes from studies in which oncoproteins from the virus are inhibited. Knock down of these viral proteins causes cells from MCV-positive MCC tumors to die whereas there is no effect on cells from tumors that are uninfected with the virus.[7] This indicates that MCV is necessary to maintain the virus-positive tumor cells. 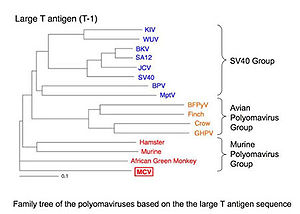 Family tree of the polyomaviruses, based on large T antigen sequence 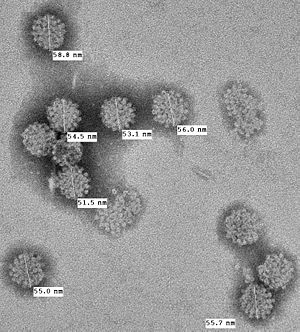 The prototype sequence of MCV has a 5387 base pair genome, and encodes characteristic polyomavirus genes including a large T antigen, small T antigen, VP1 and VP2/3 genes [1]. MCV T antigen has similar features to the T antigens of other polyomaviruses, which are known oncoproteins, and is expressed in human tumors.[1][6] The T antigen is a spliced gene that forms multiple different proteins depending on the splicing pattern. Both large T and small T antigen proteins can transform healthy cells into cancer cells by targeting tumor suppressor proteins, such as retinoblastoma protein. The large T antigen also possesses a helicase and a viral DNA replication origin binding motif that are needed for the virus to reproduce its own DNA.

Merkel cell carcinoma is a highly aggressive type of skin cancer that was first described by Cyril Toker in 1972 as "trabecular tumor of the skin".[9] The cancer may derive from the microscopic Merkel cell nervous organ in the skin and viscera which is responsible for touch and pressure sensation.[10] Based on its origin, the cancer cell type is called a neuroectodermal tumor. Although rare compared with other skin cancers, the incidence of Merkel cell carcinoma in the USA tripled between 1986 and 2001, to around 1400 cases per year.[11]

Merkel cell carcinoma is mainly seen in older individuals.[11] It is known to occur at increased frequency in people with immunodeficiency, including transplant recipients and people with AIDS,[12][13] and this association suggests the possibility that a virus or other infectious agent might be involved in causing the cancer. Kaposi's sarcoma and Burkitt's lymphoma are examples of tumors known to have a viral etiology that occur at increased frequency in immunosuppressed people. Other factors associated with the development of this cancer include exposure to ultraviolet light.[11]

Eight of 10 Merkel cell carcinoma tumors initially tested were found to be infected with MCV.[1] In these tumors, the virus has integrated into the cancer cell genome and can no longer freely replicate. Recent studies from other laboratories have reproduced these findings: in one study 30 of 39 (77%) of Merkel cell tumors were MCV positive;[14] in another study, 45 of 53 (85%) Merkel cell tumors were positive.

Sequencing of the virus from Merkel cell cancers reveals that it has generally has tumor-specific mutations that truncate the MCV T antigen. These mutations (which are not found in native virus obtained from nontumor sites) eliminate the T antigen helicase, preventing the integrated virus from replicating independently from the host cancer cell.[6] The tumor is a "dead-end host" for MCV.[15] Normally, the virus exists as circular episome (or plasmid) within the cell and its DNA is packaged into viral capsids and transmitted to other cells. In tumors, the viral DNA has broken and become integrated into human DNA within the tumor, so that the virus is no longer transmissible. The integrated virus cannot be excised from the host cell and it must replicate as the host cell is replicated. Examination of infected tumors reveals that the majority have a clear monoclonal pattern, indicating that the virus integrated into a single cell before it began its cancerous expansion.[1] For this reason, there is very strong evidence that MCV causes some, but not all, Merkel cell carcinomas. MCV can also be found in healthy tissues from people without Merkel cell carcinoma. While the precise prevalence of infection is unknown in humans, it is likely that most infections do not cause cancers.[16]

Persons who have Merkel cell carcinoma with this virus are not infectious to others and no infectious restrictions are warranted. The reasons for this are: 1) the virus in tumors is already mutated and no longer can be transmitted from tumors, and 2) most persons are already naturally exposed to this virus as children and young adults by other asymptomatic carriers.

Based on current data, prevention advice for MCC is similar to other skin cancers, such as avoiding sun burns and unnecessary sun exposure together with use of sun lotion. This may prevent mutations in the virus that increase risk for MCC among those already infected with MCV. Persons with immunosuppression (e.g., AIDS or transplant patients) are at higher risk for this cancer and may benefit from periodic skin examinations. Emergence of a painless lump that expands rapidly, especially among persons over age 50 or persons with immunosuppression, warrants examination by a physician. Biopsy of a Merkel cell tumor should readily provide a diagnosis and when caught early, has a good prognosis through standard treatment. At this time there are no vaccines or medications that can prevent MCV infection or prevent emergence of Merkel cell carcinoma.

Detection of the virus is still at a research phase and is generally not available as a clinical test. Detection of viral DNA is performed by PCR or by Southern blot. Caution is needed in interpreting results from PCR since it is prone to false-positive contamination and a substantial fraction of healthy skin samples may harbor low-level infection. Sequencing of the viral genome may determine whether or not tumor-specific mutations are present.

Antibodies have been developed to stain for T antigen in tumor tissues[17] and appear to be specific for MCV-infected tumor cells.[18][19] Blood tests have also been developed[2][3] that show the majority of adults have been previously exposed to MCV and may continue to carry it as an asymptomatic infection.

Treatment guidelines do not differ for Merkel cell carcinoma infected with MCV or without MCV. A recent country-wide study from Finland suggests that MCV-positive tumors have a better prognosis than uninfected tumors[20] (although this has not been found in other studies[15]). If this is confirmed, routine detection of the virus may provide a future benefit for medical guidance. The virus itself is not known to be susceptible to current antiviral medications.

Discovery and characterization of MCV

Yuan Chang and Patrick S. Moore, who discovered Kaposi's sarcoma-associated herpesvirus in 1994,[21] with colleagues Huichen Feng and Masa Shuda at the University of Pittsburgh, USA, used the novel high-throughput sequencing technique of digital transcriptome subtraction (DTS)[2][22] to search for the presence of a virus in Merkel cell tumors.[1] In this method, all mRNAs from a tumor are converted into cDNAs and sequenced to a depth likely to sequence a viral cDNA if it is present. The sequences are then compared with the human genome and all human sequences are "subtracted" to leave a group of sequences that are most likely nonhuman. When this was performed on four cases of Merkel cell carcinoma, one cDNA was found that was similar to sequences of known polyomaviruses but clearly distinct enough that it could be shown to be a new virus.[1] Genetic sequences from nearly 400,000 mRNAs were analyzed for the study. Once the virus was found, Feng and coworkers quickly determined that infected Merkel cell carcinomas have the virus in an integrated monoclonal pattern and only found 8-16% of tissues taken from patients without MCC were positive for the virus. This was quickly confirmed by studies of MCC patients from around the world, including evidence for monoclonal integration of the virus in these tumors.[14][15][23][24]

MCV as a cause for Merkel cell carcinoma

While the original authors conservatively noted that it is "too early to tell" whether MCV is a cause of Merkel cell carcinoma, general scientific opinion now suggests that the virus causes most, but not all Merkel cell tumors. The virus is monoclonally integrated into the tumor when present, indicating that the proto-tumor cell was infected with the virus prior to its cancerous expansion. Mutations in the T antigen render the virus noninfectious, and therefore it is not a passenger virus that infected the tumor after the tumor had already started. Finally, the T antigen oncogene is expressed in all of the tumor cells and when it is inhibited ("knocked down" by RNAi), MCV-positive cells die. Thus, the virus is required for MCV-positive tumors to grow. It is likely that additional host cell mutations act in concert with the integrated virus to actually cause the tumor. Merkel cell carcinoma is associated with exposure to ultraviolet (UV) light and to ionizing radiation, and it is likely that these mutagens increase the rate of mutation in either the virus or the Merkel cell genome, contributing to the risk for cancer after infection.

The reasons why 20% of Merkel cell carcinoma are negative for the virus remain completely unknown but speculations include the possibility that "Merkel cell carcinoma" is actually two or more closely related cancers, only one of which is infected with MCV. Misdiagnosis of this difficult cancer may also account for some of the negative results. Only a very small proportion of people infected with MCV develop the cancer. At this time no test for the presence of the virus is generally available, nor would patients be advised to change their treatment based on knowledge of MCV infection status. MCC patients can be enrolled in research studies, but these are not likely to directly benefit participants.[25] Reducing risk of UV exposure through sun screens is likely to reduce the risk of Merkel cell carcinoma as well as other skin cancers.

Moore has suggested that if his findings are confirmed, information about the virus could lead to a blood test or a vaccine that could improve the management of the disease or aid in prevention, much as the human papillomavirus vaccine can be used to prevent cervical cancer. Chang explained that study of the virus may assist in understanding other human cancers. "Once the virus integrates, it could express an oncoprotein, or it could knock out a gene that suppresses tumor growth. Either way, the results are bound to be interesting."[26][27]