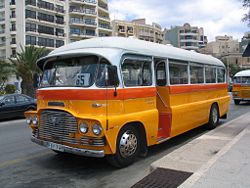 A Malta bus (xarabank, karozza tal-linja) was both the bus used for public transport on the Mediterranean island of Malta, and also a major tourist attraction on the island, due to their unique appearance grounded in the bus ownership and operation model employed on Malta. Prior to 3 July 2011, when the network of service bus routes on the island was taken over by Arriva, Malta had several bus types no longer in service anywhere else in the world.

The unique nature of the Malta bus stemmed from the tradition of local ownership of the buses by the drivers, and their historic practice of customising them. In addition to a high degree of customisation, detailing and decoration, several Malta buses also had a unique appearance due to the practice of in-house maintenance, rebuilding or modifying of bus bodies in local workshops.

As an iconic feature of the island, the classic Malta bus features on several tourist related items. As the main mode of public transport on the island, the Malta bus was also used by many tourists to visit the different parts of the island. While newer Malta buses were progressively introduced that followed modern standard bus designs found elsewhere, customisation and detailing had continued for these buses as well. 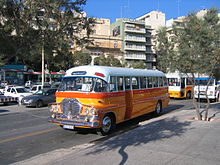 The shining chrome on a Malta bus

As early as 1905 buses were being imported to Malta. As early as 1920, bus manufacturing was taking place on the island, with local carpenters and mechanics constructing bus body coachwork for local transport companies.

In the 1920s, operation of buses on public transport routes was subject to open competition between operators, and as such, buses used were not necessarily well turned out. With the formation of the Traffic Control Board in 1931, greater regulation and discipline of the system meant that operators began to upgrade the appearance of their buses. Since then, the tradition of showing pride in the vehicles has been maintained, through decoration and customisation of the buses.

Since reform in the 1970s, bus operation was centralised under a collective of the owners, the Public Transport Association, or Assoċjazzjoni Trasport Pubbliku (ATP), in Maltese. This association became responsible for the centralised day to day operational management of bus services, producing a unified timetable roster and basic livery, although this did not change the ownership arrangements for the buses. The overall transport system is regulated under the Malta Transport Authority (ADT).

In December 2003, in light of over 100 buses being scrapped, a government subsidised tour bus service using traditional Malta buses, as the "VisitMalta bus", was set up by the tourism and transport ministries, although this was withdrawn in April 2005.[1]

While the buses generally remain popular among tourists and nostalgic Maltese, the original system was infamous and unpopular with some parts of the local population who considered the service as inefficient and polluting, driven by drivers who were sometimes very impolite to passengers. This resulted in a significant increase in private car ownership among the population, and today only one in ten trips are made via public transportation.[2] One extreme case to note occurred on 29 June 2010, when a driver attempted to forcibly pull a Spanish tourist out of her seat and off the bus following a row over seven cents in change.[3] 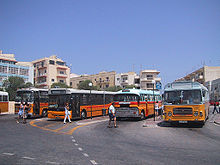 The operation model dated back to a system introduced in 1977.[4] The ATP authority determined the schedules, which were then operated by the private bus owners, who remained responsible for the condition and upkeep of their buses, either as owner operators, or in groups. As such, several buses were kept at the family homes of the drivers in question, or based in small garage locations.

To ensure fair distribution of both good and bad routes, the daily operation of buses was allocated on a rota basis, with buses operating on a 'day on, day off' basis, whereby one day half of the buses operate on the public routes, while the other half were used for private hire, or as school buses, or undergo maintenance[4]. 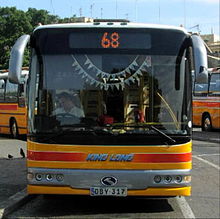 Early buses wore an olive green livery with a black stripe. In the 1930s, buses were painted different colours according to the route they operated. From 1995 vehicles carried in a yellow (lower) and white (upper) livery, relieved by a red band just below the window line.

All Malta buses immediately prior to the 2011 reform were single-deckers, with bus or coach bodies. Early buses did not have many common transit bus features, with route numbers displayed using white cards. Later buses had modern features such as electronic destination displays, but these were still not used to indicate the bus's destination, showing only the number of the route.

Very early types of bus could still be found but no longer in service, with a front engine mounted in an extended bonneted nose, in the style of some conventional trucks. The majority of classic Malta buses had elaborate grilles and headlight arrangements, curved windscreens and sloping roofs. Later makes of bus were usually of conventional bus and coach designs that were in use elsewhere in the world, such as the Plaxton Supreme and the Duple Dominant.

Between 1981 and 1987 the fleet was drastically modernised with the import of over 260 second hand buses from the United Kingdom. Many of the oldest buses in the fleet were further replaced with the influx of 150 new low-floor buses from China and Turkey, financed with government grant aid, leaving just three normal control vehicles. Second hand imports from the UK had continued up to 2008, with some of the last examples being Alexander Dash bodied Volvo B6s deemed surplus after Stagecoach's takeover of Yorkshire Traction. Even with these fleet modernisations, as of 2009, the nearly 500 strong bus fleet still contained some examples dating from the 1950s.[5] 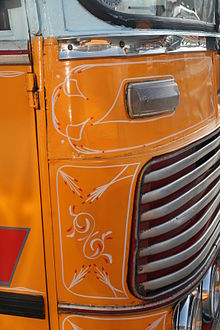 Paint detailing on a Malta bus

Malta buses were characterised by their high level of customisation and detailing. Common additions to former route buses included:

The preservation organisation Heritage Malta purchased 90 buses after the restructuring of the bus network and is currently in the process of restoring them to their original condition and preserving their customised modifications. These efforts were aided by expertise and parts provided by many of the vehicle's former owners. It is planned that these newly renovated buses will then be exhibited in an industrial heritage museum.[6] 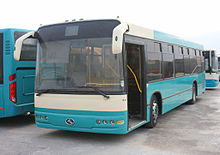 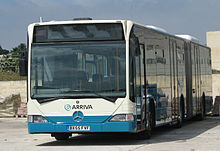 An articulated bendy bus, imported from London to serve the new system.

A major restructure of the bus service in Malta took place on 3 July 2011. The network was taken over by Arriva, new low-floor buses were introduced and service and fare structures change dramatically.[4][7][8]

The British based engineering consultancy company Halcrow Group Limited was commisioned to assess the Malta bus system. Released on November 2005, the report criticizing the existing model and arrangement between ADT and ATP, which had produced a very low utilization of buses and a decline of 50% in the number of bus passengers between 1979 and 2009.[9][10]

Finalized plans were announced in December 2008 for the first bus route restructuring on Malta since 1977.[4] Under EU rules, the right to operate the new network could not be directly transferred to the ATP, although they were free to tender for the contract. This resulted in the end of the state-subsidized owner-operator model, which as of 2009 stood at 508 buses each with an average age of 35 years, and operated by over 400 independent licensees.[4][10]

The new fleet controlled by Arriva consists of 264 buses, including 2 seven-metre buses for the intra-Valletta route, 61 nine-metre buses including 10 hybrid electric buses for park and ride services as well as selected village routes (Mater Dei-Ta' Qali, Paola-Xgħajra-Paola), 153 twelve metre buses, and 46 articulated buses for airport routes and major routes such as those to Sliema, Malta International Airport and the ferry terminals.[11] The new system increased the number of available bus seats by 6,600 to 20,500, and the number of bus stops in Malta to 850 plus another 120 in Gozo.[10]

The major benefits to the public for the change were presented in November 2010:[10]

The current bus fleet, all in Arriva's standard aquamarine and cream livery, is composed of Euro V King Long buses along with Arriva London's Mercedes-Benz Citaro G articulated buses. Some of the newer buses from the previous operator have also been introduced into the new system. The network receives a subsidy of around €6 million per year. Passengers holding Maltese ID cards receive a 40% reduction of the price of their journeys due to subsidised fares, while non-ID card holders (including tourists) pay the full undiscounted fare, prompting the European Commission to launch an inquiry on whether the two-tiered price structure violetes EU discrimination laws.[12][13]

The commencement of Arriva's services on 3 July 2011 was marred by many buses departing late or failing to turn up, primarily due to the absence of over 70 drivers who were due to transfer from the previous driver-owner system. This resulted in large crowds building up at Valletta's new bus terminus as well as other termini and stages across Malta. Other issues increased the delays, such as incorrect or non-operational route information on buses and mechanical faults. Arriva has also received criticism over the overhauled routes and timetables, which has increased journey times for some passengers.[14]

During the first week of the new system, up to 180 drivers, most of whom had previously worked on the old network, failed to appear for duties. They cited Arriva's use of split-shifts as the reason for their non-appearance, as these had reportedly not been part of the conditions they had agreed to work under. Their actions received some criticism, with politician Emanuel Delia accusing the drivers of attempting to sabotage services so that the new system would be abandoned. Arriva responded by drafting in sevety temporary drivers from its UK operation and trained further Maltese drivers to cover for the missing employees. Some services were subcontracted to other companies.[15]

A new shift pattern took effect at the end of July 2011.[16] A series of changes to the new routes in response to criticism were announced on 23 July 2011, to be implemented between July and October.[17][18] In August 2011, Arriva recognised the General Workers’ Union as a representative of its employees in the country.[19] Further changes affecting 112 routes were announced in October by transport minister Austin Gatt, introducing more buses to Valletta and Mater Dei Hospital.[20]

Open-top bus operation on Malta was first proposed in the early 1990s, when several double-deck vehicles were imported from the United Kingdom by private company Garden of Eden. The Transport Authority refused to license their operation as passengers standing on the top deck could reach a height over four metres, the maximum level allowed.[21] In June 2007, this decision was reversed and two tourist services, a north tour and a south tour, began operation using eight open-top vehicles[22] and this has since been expanded and a similar tour on Gozo introduced.