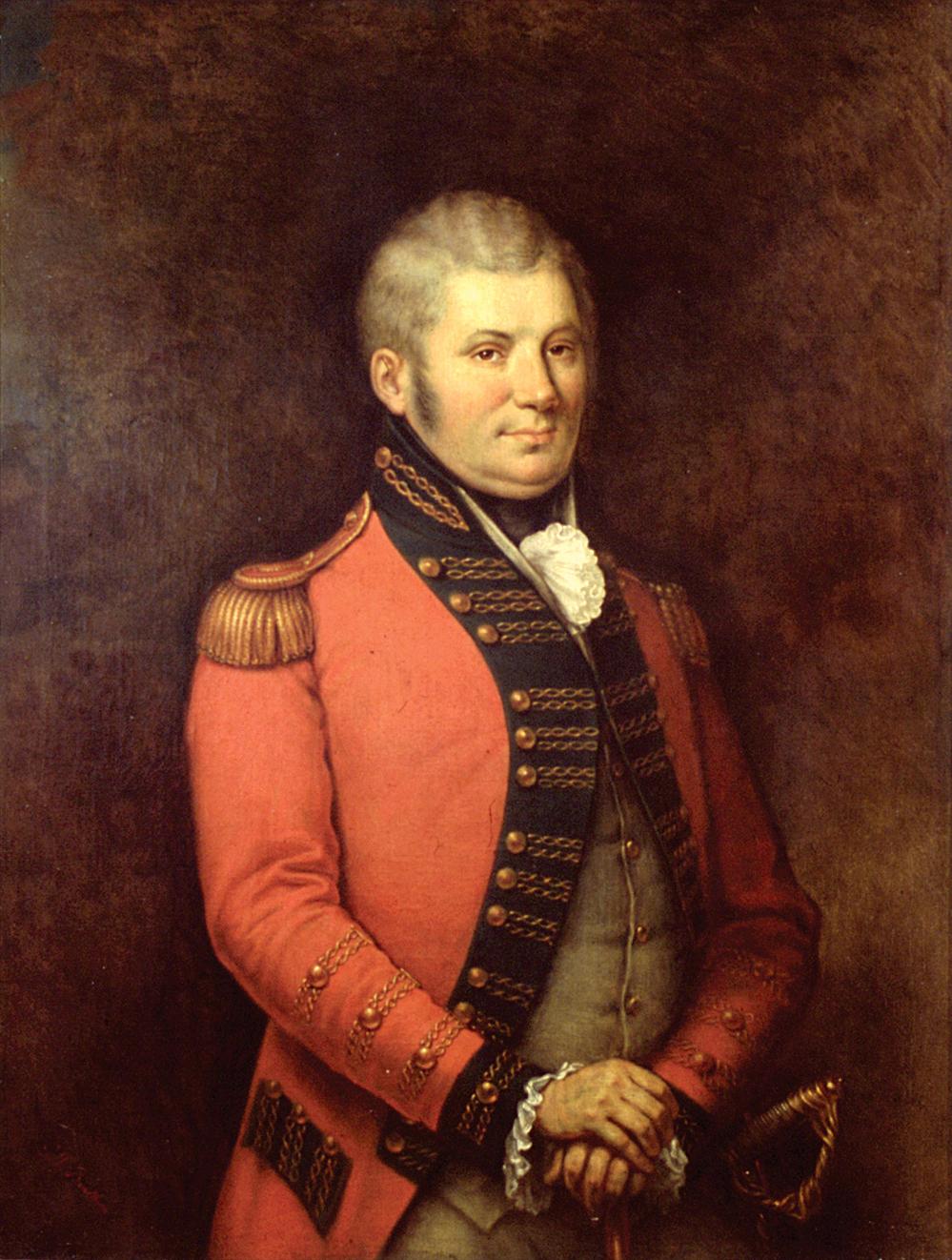 
Lieutenant-General John Graves Simcoe (, &ndash; , ) was the first of (modern-day southern and the watersheds of and ) from 1791-1796. He founded York (now ) and was instrumental in introducing institutions such as the s, , , freehold land tenure, and for abolishing slavery in Upper Canada long before it was abolished in the as a whole (it had disappeared from Upper Canada by 1810, but was not abolished throughout the Empire until 1834).

John Graves Simcoe was the only son of John (1710-1759) and Katherine Simcoe . His father, a captain in the , commanded the 60-gun HMS "Pembroke" ( was his sailing master) during the 1758 . His father died of a few months prior to the siege of Quebec. His paternal grandparents were William and Mary (née Hutchinson) Simcoe.

Simcoe was educated at Eton and .

The Simcoes' had five daughters prior to their posting in . Son Francis was born in 1791. Their born daughter, Katherine, died in infancy in . She is buried in the Victoria Square Memorial Park on Portland Avenue.

In 1770, Simcoe entered the British Army as an ensign in the . His unit was dispatched to America, where he saw action in the . During the siege, he purchased a captaincy in the company of the .

With the 40th, he saw action in the New York, New Jersey and s. Simcoe commanded the 40th at the , where he was also wounded.

In 1777, Simcoe sought to form a Loyalist regiment of free blacks from Boston, but instead was offered command of the , a well-trained light infantry unit comprising of 11 companies of 30 men, 1 grenadier and 1 hussar, and the rest light infantry. The Queen's Rangers saw extensive action during the Philadelphia campaign, including a successful surprise attack (planned and executed by Simcoe), at the .

In 1778, Simcoe commanded the attack on Judge William Hancock's house, killing 20 Americans in their sleep and wounding 12 others. William Hancock was also killed even though he was not with the Americans. The massacre took place at night and with bayonets.On June 28 of that year, Simcoe and his Queen's Rangers took part in the Battle of Monmouth Courthouse, in and near Freehold, New Jersey.

During the winter of 1779, Simcoe attempted to capture , but decided that his men would not shoot the future president. During that year, Armand Tuffin de La Rouërie captured Simcoe. [cite news|title=If you don't like Toronto, blame him|last=Cote|first=Joe|date=2008-08-04|work=Toronto Star|publisher=Torstar|pages=AA6|accessdate=2008-09-16] [cite web|url=http://www.uppercanadahistory.ca/simcoe/simcoe1.html|title=John Graves Simcoe|last=Wilson|first=W. R.|date=2007|accessdate=2008-09-16] Simcoe was released in 1781, just in time to see action at the He was invalided back to England in December of that year as a Lieutenant-Colonel.

Simcoe wrote a book on his experiences with the Rangers, titled "A Journal of the Operations of the Queen's Rangers from the end of the year 1777 to the conclusion of the late American War", which was published in 1787.

The Province of Upper Canada was created under the "". Simcoe was appointed lieutenant governor and made plans to move to Upper Canada with his wife Elizabeth and daughter Sophia, leaving three other daughters behind with their aunt. They left in September and arrived on . This was too late in the year to make the trip to Upper Canada and the Simcoes spent the winter in . The next spring they moved to Kingston and then Newark (now Niagara-on-the-Lake).

Simcoe's first priority was dealing with the effects of the . War broke out between Britain and France in 1791, and although the United States pledged neutrality its sympathies were with France. Simcoe's instructions were not to cause the United States any reason to mistrust Britain, but at the same time to keep the Indians on both sides of the border friendly to Britain. Simcoe denied the existence of the boundary defined in the on the grounds that the Americans had nullified the treaty. [Taylor pg. 269] The British wished for the Indians to form a buffer state between the two countries. The Indians in the Ohio area were in an ongoing war with the United States called the . The Indians asked for military support from the British in this war, which Britain initially refused but they did supply the Indians with weapons in 1794. In February 1794, the Governor in Chief Lord Dorchester, anticipating that the Americans would honour their treaty with France, said that war was likely to break out between the countries before the year was out. His statement encouraged the Indians in their war. Dorchester ordered Simcoe to rally the Indians and arm the vessels on the Great Lakes. He also build (in present day Indiana) to supply the Indians in the upcoming war. Americans were expelled from a settlement on southern Lake Erie which had threatened British control of the lake. denounced the "irregular and high-handed proceeding of Mr. Simcoe" [Taylor pg. 284] While Dorchester planned for a defensive war, Simcoe urged London to declare war "Upper Canada is not to be defended by remaining within the boundary line" [Taylor pg. 287] Lord Dorchester was given an official reprimand for his strong speech against the Americans in 1794.

Simcoe realized that Newark made an unsuitable capital because it was right on the United States border and subject to attack. He proposed moving the capital to a more defensible position in the middle of Upper Canada's southwestern peninsula between and . He named the new location London and renamed the river as the Thames in anticipation of the change. Lord Dorchester, rejected this proposal but accepted Simcoe's second choice of Toronto. Simcoe moved the capital to Toronto in 1793 and renamed the location York after , George III's second son.

Simcoe began construction of two main routes through Ontario which were intended to aid in the defence of but would also help encourage settlement and trade throughout the province. , named after the Minister of War Sir George Yonge, was built north-south along the fur trade route between and . Soldiers of the began cutting the road in 1793, reaching in 1796. Another road, Dundas Street named for the Colonial Secretary Henry Dundas, was built east-west between Hamilton and York.

The Indians were defeated at the which resulted in the peace . The British while still at war with France could not afford to antagonise the Americans and in the they agreed to abandon the frontier forts and to relocate on their side of the border agreed to in the . The plan for an Indian buffer state failed and after the surrender of in November, 1796 the two countries directly faced each other over the Niagara river.

In 1796 poor health forced Simcoe to return to Britain. He was unable to return to Upper Canada and resigned his office in 1798. He became of the in 1798, but exchanged it for the less than six months later. He later served briefly as the commander of British forces in St. Domingo () and commander of the Western District in Britain. In 1806, he was appointed commander-in-chief of but died in Exeter before assuming that post. He was buried in Wolford Chapel on the Simcoe family estate near , . The Ontario Heritage Foundation acquired title to the [http://www.heritagefdn.on.ca/userfiles/HTML/nts_1_2724_1.html#2726 chapel] in 1982.

* passed in 1793 and eventually led to the abolition of slavery in by 1810. It was superseded by the that abolished slavery across the .
* A plaque placed by the in Exeter's cathedral precinct commemorates his life.
* The town of Simcoe in southwestern Ontario is named after him.
* Simcoe County to the west and north of is also named after him. Lake Simcoe, meanwhile, was named by John Graves Simcoe for his father.
* , a statutory holiday celebrated throughout Canada under a variety of names by region,

There are two places named for Simcoe with the title "Lord". However, Simcoe was never a Lord in his life time: