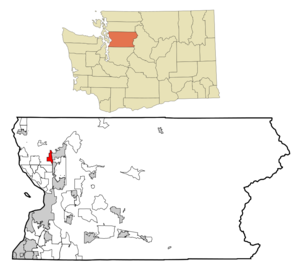 Smokey Point is a bustling residential, commercial, and industrial community located in Snohomish County, , USA. Formerly a (CDP) prior to the annexation of the territory inside its , the northeast portion of the Smokey Point community now lies within the City of Arlington, whereas the western and southern portions lie within the City of Marysville.

Smokey Point got its name from a 1950s outdoor-barbecue restaurant started by Eric and Pearl Shurstad, who called their place the Smokey Point Café after the plume of smoke it generated. The restaurant, which was on the northwest corner of Smokey Point Boulevard and Lakewood Road (now 172nd Street NE; also SR 531), is no longer there, but the community has lasted ever since.

In the early 1990s, after a controversial land-use was proposed for the area, several property owners began an effort to petition the City of Arlington to annex a large portion of the Smokey Point community. Around the same time, another group of property owners began an effort to annex much of the same territory into the City of Marysville. The group working on annexing into Arlington was able to reach the required 60% assessed value threshold first, enabling their annexation to move forward.

The City of Marysville, having a vested interest by being the sewer and water utility provider for the area and having an interest in annexing Smokey Point, challenged the annexation, along with the residential community whose property was added to the annexation boundaries by the state [http://www1.co.snohomish.wa.us/Departments/Boundary_Review_Board/ Boundary Review Board for Snohomish County.]

At that time, there was a single Arlington-Smokey Point-Marysville Urban Growth Boundary, causing confusion as to what city could potentially annex which area of Smokey Point. After many meetings with officials, the two cities ended up with separate urban growth boundaries for future annexation. Arlington was given the northeast portion of Smokey Point; Marysville was given the western and southern portions. However, when this proposal was presented to the local community, there was overwhelming opposition, as the community desired to have their entire community be annexed into one city, not split between two. The County Council had the final say, however, and approved the territory divisions.

To further complicate things, there was a little-known state law on the books that would have transitioned the annexed territory from the [http://www.lwsd.wednet.edu/ Lakewood School District] that served Smokey Point to the school district of the annexing city. Being that nearly all of the commercial area of Smokey Point was petitioned to be annexed into Arlington, the loss of such a tax base would have been devastating to the Lakewood School District.

After receiving much input from the local community with the desire to keep their community intact, SOCS filed a Notice of Intent for Incorporation, which would create the City of Smokey Point-Lakewood. The proposal was put on hold, however, since [http://apps.leg.wa.gov/RCW/default.aspx?cite=35.13.176 state law] mandated that incorporations cannot occur while an annexation involving land in the same area is still pending.

After years of controversial court battles, lawsuits, redrawn boundaries, and strong opposition by the residential community, the annexation question was finally resolved in 1999, when the City of Arlington annexed the northeast portion of Smokey Point. The actual land annexed was but a small percentage of the originally-petitioned area, due to the redrawn urban growth boundaries. As a result of the annextion, the effort to keep the Smokey Point community intact ended, along with the hopes of incorporation. As expected, in the years since then, the southern and western portions of Smokey Point have been annexed into the City of Marysville.

There has been substantial commercial growth in Smokey Point in recent years. Most recently, the western side of Smokey Point (within the City of Marysville) has received much of this growth. In late 2006, the commercial area called "Lakewood Crossing" opened, just west of the Interstate 5 exit to Smokey Point (exit 206), with and Target, and as the first tenants to open. , , , and are among some of the other businesses located here. On the eastern side of Smokey Point (within the City of Arlington), a and Taco Del Mar restaurant opened in May 2007, and a has been proposed.

There were 628 households out of which 32.2% had children under the age of 18 living with them, 58.1% were married couples living together, 6.2% had a female householder with no husband present, and 32.3% were non-families. 25.0% of all households were made up of individuals and 11.3% had someone living alone who was 65 years of age or older. The average household size was 2.48 and the average family size was 2.99.