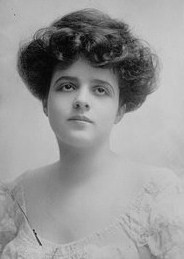 Edna Goodrich (born Bessie Edna Stevens; , &ndash; , ) was a prominent Broadway actress, girl, author, and media sensation during the early 1900s. At one point, she was known as one of America's wealthiest and best dressed performers. She was married to Edwin Stacey of Cincinnati, Ohio, and later .

The daughter of Nellie Goodrich and A.S. Stevens, Edna was raised by her great-grandfather, Abner Scott Thornton, a member of the influential Thorntons. His brothers included , a noted physician; Henry Clay Thornton, a prominent lawyer and father of ; and Dr. Joseph Lyle Thornton, a respected educator and manufacturer. Judge was his nephew [www.thorntonsoky.blogspot.com] .

Upon reaching her maturity, Edna and her mother moved to , where both found work as chorus girls. Edna Goodrich joined the cast of the musical, as one of the famed sextets, all of whom were extremely beautiful, 5'4", and 130 lbs. Out of more than 70 women who became a Florodora girl, Edna was one of a handful who achieved lasting fame [Aronson, Rudolph. Theatrical and Musical Memoirs; McBride, Nast, and Company, 1913] .

It was as a sextet that Edna Goodrich became involved in the murder trial, which was labeled by 's newspapers. Thaw killed architect during a performance at over Mr. White's relationship to . It was reported that Edna Goodrich had introduced fellow Floradora chorus girl Nesbit and White during a intimate meeting in White's apartment. Edna Goodrich was served with several subpoenas during the trial, reportedly tearing one apart in front of the serving agent. She denied any knowledge of the affair [Reno Evening Gazette, Jan. 9, 1908; May 12, 1908] .

After leaving Floradora, Edna Goodrich became the leading lady of the comedic productions. Mr. Goodwin was the most famous American comedian of his era and scion of a mining family that had made millions. Their performances played to packed theaters across the and , making both fodder for early news sensationalism.

In 1908 Goodrich and Goodwin became involved in a confusing sequence of events and news reports that would lead to their marriage. First, the press linked Edna with millionaire ; however, as the marriage date was continuously postponed, rumors began to circulate of discord. Edna affirmed the engagement and then took off for Europe on a $20,000 spending spree. Afraid of losing Edna, Nat Goodwin sailed to Europe to convince her that Mr. McMillanwas actually poor. He hired private investigators to tail Ms. Goodrich; She hired private investigators to stay one step ahead of his investigators. ["Trenton Evening Times", , .] This chase across Europe so unsettled Mr. McMillan that he asked Edna if she would not rather marry immediately in . She said that she wanted to marry in her own country and set sail for the United States with her purchases. ["Trenton Evening Times", , ; , .] Surprisingly, within short order, the wedding was called off- the press attributed this change to Mr. McMillan's mother who had refused her consent after hearing of Edna Goodrich's involvement in the divorce of Nat Goodwin with his third wife, . The press later reported that Ms. Elliot became engaged to Mr. McMillan.

In the fall of 1908, Nat C. Goodwin and Edna Goodrich were married. The bride reportedly wore more than $60,000 worth of jewelry [Trenton Evening News, Nov 9, 1908] Also, Nat and Edna signed a prenuptial agreement, entitling her to half of his estate and an income for life. At first, the press believed the amount conferred to be $400,000, but later, during divorce proceedings, it was revealed that the amount totaled more than $1.7 million.

By the summer of 1910, the press began to circulate rumors of the Goodwins' impending separation amid rumors over Nat Goodwin's flirtation with another actress ["Trenton Evening Times", , .] This began a two year press and court battle over the terms of the prenuptial trust, with both Goodrich and Goodwin filing repeated suits against one another. The official divorce was granted in New York, with the judge allowing Ms. Goodrich to once again use her maiden name and barring Mr. Goodwin from ever marrying in the state again [The Washington Post, July 26, 1911] .

From 1914 to August 1915, Edna Goodrich served as a nurse of wounded for the British Army. Her cottage was later turned into a for soldiers returning from the front. [The Syracuse Herald,Aug. 15, 1915; Trenton Evening Times, Oct. 18, 1915] Her mother's cousin, , was the highest ranking American-born officer in the British Army.

For the rest of the decade, Edna worked in theater and appeared in several movies of the Silent Screen, although she never captured the same degree of success as she enjoyed on stage. Also, she reportedly developed an alcohol addiction that caused her to be fired on the set of "The Golden Chance (1915)" by [Birchard, Richard S. Cecil B. Demille's Hollywood, 2004 (pg. 72)] .