Coffee cup
This article is about the drinkware. For the campaign conducted by the American Medical Association, see Operation Coffee Cup. 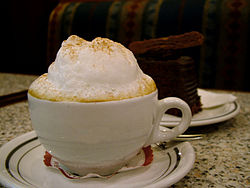 A cappuccino in a ceramic coffee cup

A coffee cup may refer to a type of container from which coffee is consumed. Coffee cups are typically made of glazed ceramic, and have a single handle, allowing for portability while still hot. Ceramic construction allows to be drunk while hot, providing insulation to the beverage, and quickly washed with cold water without fear of breakage, compared to typical vessels made of glass.

Some types of cups are quite exclusively used for drinking coffee, such as an espresso demitasse or cappuccino cup. Other types of cups commonly used for coffee but are also commonly used for other beverages as well include a teacup or mug. Coffee cups have long been used as promotional items, with corporate logos, messages (e.g., "Worlds Best Dad"), or in the office, a statement of character, political affiliation emblazoned on the side of the mug.

A coffee cup may also refer to disposable cups from which hot beverages (including coffee) are drunk. Disposable coffee cups typically are made of paper or styrofoam. Paper cups at many coffee shops are encircled with a coffee cup sleeve to provide insulation against heat transferred through the surface of the container.

The Anthora paper coffee cup, first designed by Leslie Buck for coffee-to-go by the Sherri Cup Company in 1963 for the New York metropolitan market, has become so identified with New York City that its image has appeared on the cover of the Manhattan Yellow Pages, and is recognizable in numerous television shows and movies set in New York.[1]