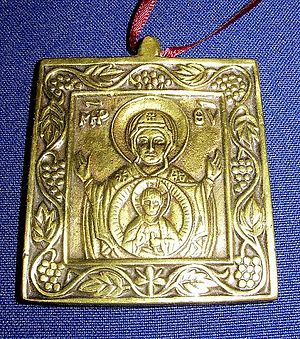 Orans (Latin, praying), (or Orante) is a figure with extended arms [1] or bodily attitude of prayer, usually standing, with the elbows close to the sides of the body and with the hands outstretched sideways, palms up.

It is common in Christian art as early as the wall paintings in the Catacombs of Rome[2] and is still used in both private and communal prayer by both clergy[3] and laity[4]. The Platytéra, a standard hagiographic depiction on the Virgin Mary as "Wider than the Heavens", is an orans-type depiction usually placed on the half-dome above the altar of Byzantine-style churches, and facing down the nave.

The custom of praying in antiquity with outstretched, raised arms was common to both Jews and Gentiles, and indeed the iconographic type of the Orans was itself strongly influenced by classic representations. But the meaning of the Orans of Christian art is quite different from that of its prototypes.

Numerous Biblical figures, for instance, depicted in the catacombs — Noah, Abraham, Isaac, Shadrach, Meshach and Abednego, and Daniel in the lions den — are pictured asking the Lord to deliver the soul of the person on whose tombs they are depicted as He once delivered the particular personage represented. But besides these Biblical Orans figures there exist in the catacombs many ideal figures (153 in all) in the ancient attitude of prayer, which, according to Wilpert, are to be regarded as symbols of the deceased's soul in heaven, praying for its friends on earth.

This symbolic meaning accounts for the fact that the great majority of the figures are female, even when depicted on the tombs of men. One of the most convincing proofs that the Orans was regarded as a symbol of the soul is an ancient lead medal in the Vatican Museum showing the martyr, St. Lawrence, under torture, while his soul, in the form of a female Orans, is just leaving the body. An arcosolium in the Ostrianum cemetery represents an Orans with a petition for her intercession: Victoriæ Virgini . . . Pete . . . The Acts of St. Cecilia speaks of souls leaving the body in the form of virgins: "Vidit egredientes animas eorum de corporibus, quasi virgines de thalamo", and so also the Acts of Sts. Peter and Marcellinus.[1]

Very probably the medieval representations of a diminutive body, figure of the soul, issuing from the mouths of the dying were reminiscences of the Orans as a symbol of the soul. The earlier Orantes were depicted in the simplest garb, and without any striking individual traits, but in the fourth century the figures become richly adorned, and of marked individuality, an indication of the approach of historic art. One of the most remarkable figures of the Orans cycle, dating from the early fourth century, is interpreted by Wilpert as the Blessed Virgin interceding for the friends of the deceased. Directly in front of Mary is a boy, not in the Orans attitude and supposed to be the Divine Child, while to the right and left are monograms of Christ.[1]