The Commodore 64 Games System (often abbreviated C64GS) was the cartridge-based game console version of the popular Commodore 64 home computer. It was released by Commodore in December 1990 as a competitor in the booming console market. It was only ever released in Europe and was a considerable commercial failure.

The C64GS was not Commodore's first gaming system based on the C64 hardware. However, unlike the 1982 MAX Machine (a game-oriented computer based on a very cut-down version of the same hardware family), the C64GS was internally very similar to the "proper" C64 with which it was compatible. 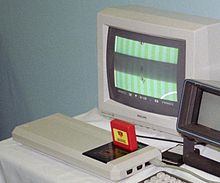 Support from games companies was limited, as many were unconvinced that the C64GS would be a success in the console market. Ocean Software were the most supportive, offering a wide range of titles, some C64GS cartridge-based only, offering features in games that would have been impossible on cassette-based games, others were straight ports of C64 games. Domark and System 3 also released a number of titles for the system, and conversions of some Codemasters and Microprose games also appeared.

Ocean produced a number of games for the C64GS, among them a remake of Double Dragon (which seemed to be more linked to the NES version than the original C64 cassette version), Navy SEALS, Robocop 2, Robocop 3, Chase HQ 2: Special Criminal Investigation, Pang, Battle Command, Toki , Shadow of the Beast and Lemmings. They also produced Batman The Movie for the console, but this was a direct conversion of the cassette game, evidenced by the screens inciting the player to "press PLAY" that briefly appeared between levels. Some of the earliest Ocean cartridges had a manufacturing flaw, where the connector was placed too far back in the cartridge case. The end result was that the cartridge could not be used with the standard C64 computer. Members of Ocean staff had to manually drill holes in the side of the cartridges to make them fit.

System 3 released Last Ninja Remix and Myth: History in the Making, although both were also available on cassette. Domark also offered two titles, Badlands and Cyberball, which were available on cartridge only.

Uncharacteristically, Commodore never produced or published a single title for the C64GS beyond the bundled four-game cartridge. International Soccer was the only widely-available game for the C64GS but had actually been written for the C64.

The C64GS was plagued with problems from the outset. Firstly, despite the wealth of software already available on cartridge for C64, the lack of a keyboard meant that most could not be used with the console. This meant that people often bought secondhand C64 software on cartridge only to find that the games were not compatible. The C64 version of Terminator 2: Judgment Day was designed for the console, but was included on a cartridge that required the user to press a key to access the game, rendering it unplayable.

To partially counter the lack of a keyboard, the basic control system for the C64GS was a joystick supplied by Cheetah called the Annihilator. This joystick, while using the standard Atari 9-pin plug, offered two independent buttons, with the second button located on the base of the joystick. This 9-pin plug was standard of many systems of the era, and the joysticks were fundamentally compatible with the ZX Spectrum's Kempston Interface and the Sega Master System. The Cheetah Annihilator joystick was poorly built, had a short life, and was not widely available, making replacements difficult to come by.

Prior to the console's release, Commodore had generated a great deal of marketing hype to generate interest in an already crowded market. Zzap! 64, a Commodore 64 magazine of the era, reported that Commodore had promised "up to 100 titles before December", even though December was two months from the time of writing. In reality 28 games were produced for the console during its shelf life - most of which were compilations of older titles, and a majority of which were from Ocean. Of those 28 titles, only 9 were cartridge exclusive titles, the remainder being ports of older cassette-based games.

While most of the titles that Ocean announced did appear for the GS (with the notable exception of Operation Thunderbolt), a number of promises from other publishers failed to materialise. Although Thalamus, The Sales Curve, Mirrorsoft and Hewson had expressed an interest, nothing ever materialised from these firms. Similar problems plagued rival company Amstrad when they released their GX4000 console the same year.

There were other reasons attributed to the failure of the C64GS, the major ones being the following:

Several years later Commodore's next attempt at a games console, the Amiga CD32, encountered many of the same problems although overall it was a lot more successful than the C64GS.

The specifications of the C64GS is a subset of those of the C64, the main differences being the leaving out of the unnecessary user port, serial bus port, and tape drive port. These ports are in fact present, the system board being the C64C's board, but simply not exposed at the rear.

The ROM contains two important differences to a standard C64 ROM. The first is that switching on the machine without a cartridge present results in a character-based animation asking the user to insert a cartridge. The second is an additional set of windowing commands, designed to compensate for the lack of a keyboard. However, there is no known software that uses it.