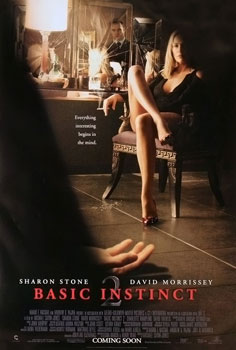 "Basic Instinct 2", also known as "Basic Instinct 2: Risk Addiction", is a 2006 , being the long awaited sequel to 1992's "". The film was directed by and produced by , Joel B. Michaels, and . The screenplay was by Leora Barish and . It stars , who reprises her role from the original, as well as and .

The film follows novelist and suspected serial murderer , who is once again in trouble with the authorities. appoints psychiatrist Dr. Michael Glass to evaluate her after a man in Tramell's presence dies. As with Detective Nick Curran in the first film, Glass becomes a victim of Tramell's seductive games.

After being in for a number of years, the film was shot in from April to August 2005, and was released on , . The film was not as well received as its predecessor and fell short of commercial expectations.

Plans for a third film have (at this time) been scrapped due to the film's poor box office reception. However, Stone has reportedly been championing the film's production and, if greenlighted, said she would not be starring in the final installment to the trilogy but would hope to instead be its director.

The film is set in (as opposed to in the original). It opens with American best-seller author Catherine Tramell in a speeding car with her companion, a famous British football star. Tramell takes the man's hand and begins with it, all the while increasing her vehicle's speed. At the point of , Trammell veers off the road and crashes into the in . She attempts to save her partner but, as she says in the subsequent scene, "When it came down to it, I guess my life was more important to me than his."

Tramell is interrogated by Detective Supt. Roy Washburn of . He claims that D-Tubocurarine (a neuromuscular blocking agent, used to relax muscles during general anesthesia) was found in her car, and that a man named “Dickie Pap” said that he sold Tramell “15 milliliters of DTC last Thursday.” Tramell counters by saying that this Dickie Pap must be lying because “you’ve got him on some other charge and he's trying to deal his way out, if he even exists.”

Tramell continues therapy sessions with Dr. Michael Glass, who has conducted a court-ordered psychiatric exam and given testimony in her case. She begins to play psychological games with Glass, who becomes increasingly frustrated with, yet intrigued by, this mysterious woman. Glass's own life begins a spiral of destruction.

One night, while having with a lesser character, Glass makes love with a violent aggression after dealings with Trammell, similar in the fashion that 's character Nick Curran did to police psychologist Dr. Beth Garner in the original . Glass receives a call from his ex-wife in a state of distress. Her partner, a journalist writing a negative story about Glass, has been found dead. Multiple murders begin to surface around him, his obsession with Tramell grows and his career and life are threatened until he can no longer tell right from wrong.

A ruined man in the end, silent and institutionalized, Glass learns from Tramell that the subject of her novel was, as with Curran back in San Francisco, a man very much like him.

"Basic Instinct 2" had been in "" for the better part of a decade. In 2000, the film was announced as having a March 2002 release. However, casting for the male lead was long and troublesome, with male actors declining the role due to either the level of sexuality or the violently explicit nature of the film. When no acceptable male lead had been cast before the slated production start date of 2001, the project was cancelled. Stone immediately sued the producers for .

In 2004, just before Stone's case was brought to trial, both sides settled for undisclosed terms. One of the conditions of the settlement that was made public was that the movie would be made as it had been originally planned. In April 2005, the filmmakers and Stone (who was a key element of her male co-star's casting), chose British actor , and production began.

On Sharon Stone's 48th birthday, , , several deleted scenes from the film appeared online at basicinstinct2.com. The scenes did not appear in the finished R-rated theatrical version of the film (nor in the Unrated DVD, oddly enough), and they are presumed to have been given an rating by the , which would explain their absence. This website has been shut down and now redirects to Sony.

Upon release the film found little praise from critics. On , a film review collection website, the film earned a 6% fresh rating, meaning that out of 105 reviews, only 7 were favorable. It recently received the 2006 "Moldy Tomato" award for being the worst-reviewed film of the year, and ranks at #70 as the worst critiqued movie ever [ [http://www.rottentomatoes.com/features/special/2007/wotw/?r=69&mid=1156297 Rotten Tomatoes ] ] as tracked by . Although some critics approved of Stone's performance, it was the film's plot that became the main target of criticism. The film also suffered from comparison to the original "", which was more popular with critics.

While the movie flopped at the American box office and made only a moderate dent in European and Australian cinemas, it was a minor success on DVD and video. Its first week of release (starting , ), it placed third. Counting U.S. rentals alone, the film has collected $21.01 million. It took "BI2" 3 months and 10 days to be released on video and DVD.

*In the film, Sharon Stone drives a Spyker C8 Laviolette.
*The only on location filming to take place outside of central London was at , , 32 km (20 miles) southwest of London in Egham, Surrey. This institution doubled as a hospital. It also features in the movie "Howards End".
*In the movie, Catherine Tramell's newest book is titled "Shooter" and is based upon Michael Douglas's character in the first movie.
* Catherine would even mention Michael Douglas's character by name (Nick Curran) in one of her sessions with Dr. Glass following the "Shooter" book scene that Dr. Glass attends, and there seems to be a very subtle hint that Nick Curran was dead when she spoke during that scene to Dr. Glass.
*The unrated version of the DVD is still missing footage. A scene featuring Michael Glass seducing Catherine Tramell in his office is missing and a scene featuring Michael involved in a threesome is also deleted. There are also some minor shots missing that appeared in the promo reel that include Catherine Tramell getting out of the hot tub, showing full frontal nudity and Catherine wearing a see-through outfit with no underwear on. The promo reel is still available on numerous websites.
*Of interest to architects, the office scenes all take place either outside or within 30 St. Mary Axe, also known as "The Gherkin", a famous office tower designed by , Architect.
* In the episode "" of Scrubs, Turk and J.D. say that buying tickets to Basic Instinct 2 was one of the worst mistakes of JD's life, implying that this may even have been a worse mistake than J.D.'s break up with his ex-girlfriend Elliot.