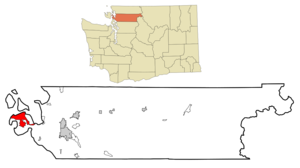 Anacortes was officially incorporated on 19 May 1891.

There were 6,086 households out of which 28.3% had children under the age of 18 living with them, 56.2% were married couples living together, 9.3% had a female householder with no husband present, and 31.6% were non-families. 26.6% of all households were made up of individuals and 13.9% had someone living alone who was 65 years of age or older. The average household size was 2.37 and the average family size was 2.84.

Anacortes is on . It is surrounded by the north and on three sides, and by the Swinomish Channel and the flats of Skagit Valley to the east. The weather is milder than other areas of the , because it lies within the Olympic Mountain . Fidalgo Island gets 21" of rain per year, only half as much as .

Anacortes was established with a name and a post office in 1877 in the vain hope that it would be selected as the western terminus of the transcontinental railroad. The town was officially incorporated in 1891 shortly after the railroad bust, and became a lumber and fishing center. In the 1950s oil companies built big refineries near town. Two of the five refineries in Washington are located near the town. One is owned and operated by Tesoro (originally built and owned by Shell Oil), the other is owned and operated by Shell Company (originally built and owned by Texaco). Refining remains the area's largest industry, but the economic base now includes yacht construction/shipbuilding, tourism, and residential services for the nearby Whidbey Island Naval Air Station.

Anacortes is a popular destination for boaters and those traveling on to the San Juan Islands. The city maintains a convert|220|acre|km2|sing=on city park on the northwestern end of Fidalgo Island called Washington Park. This park features camping, boat launching, and majestic views of the . The most prominent view is of Cypress Island.

, convert|2800|acre|km2 with convert|50|mi|km of mountain biking and hiking trails, are a rare amenity in a city the size of Anacortes. In adjacent Mount Erie Park, a number of routes are popular on the cliffs of the south and west faces of . Mount Erie has an elevation of 1273 feet, making it's views from the top scenic. [cite web | title =Climbing Area: Mount Erie | work =Climbing Area Information | publisher =Washington Climbers Coalition | url =http://www.washingtonclimbers.org/Climbing/erie.htm | accessdate = 2007-11-01 ]

An annual event held each August is the hughly popular "" which originated in 1962 as the brain-child of Dr. Jack Papritz and a group of dedicated community arts patrons. The idea came from Dr. Papritz's European travels, specifically the Parisienne Montmartre, a French open-air cafe. City officals block-off the downtown main street areas. Venders, merchants, artisans present their wares in covered booths. Jazz and blues musicians are showcased from four different stages. The event is free to the public.

Anacortes also hosts the "", an annual biker friendly motorcycle rally held on the fourth Sunday of September. Beginning in 1981, the event has grown into the largest rally in the Pacific Northwest, with an estimated motorcycle count of 8000 bikes; and growing in numbers each year. The "Oyster Run" orgin is attributed to "Limp Lee" and some of his riding friends who originally rode to the small town of Everson for some oyster cocktails. As the event grew in popularity, there were just too many people to have an organized run up Hwy 9, so "Limp Lee" talked to the city of Anacortes about being the destination town. Lee says, "the rest is history". As for how Lee got his name...well that's another story.