Habitat Retail Ltd. is a retailer of household furnishings in the United Kingdom, France, Germany, Spain, and has franchised outlets in other countries. Founded in 1964 by Terence Conran, it was sold by the IKANO Group, owned by the Kamprad family, in December 2009 to Hilco, a restructuring specialist. As of 24th June, 2011 all but three UK Habitat stores are being put into administration in a deal to sell the indebted furniture chain, with the brand and the three London stores being sold to Home Retail Group.[1]

Terence Conran founded the company in London in 1964, opening his own store to market his Summa range of furniture.[2] The first Habitat store was opened in Fulham Road in Chelsea[3] by Conran, his then wife Caroline, Philip Pollock and the model Pagan Taylor.[4] This store became the Habitat template, with its quarry tiled floor, whitewashed brick walls, white-painted wooden-slatted ceilings and spotlights creating a feeling of space and focusing attention on the product.[4] Conran has said the main reason for the shop's initial success was that Habitat was one of the few places that sold cheap Pasta storage jars just as the market for dried pasta took off in the UK.[3]

The business expanded quickly in the UK throughout the 1960s and internationally with the first overseas store opening in 1973 in Paris.[2] Habitat also published a catalogue that showed a range of products grouped together in pleasant surroundings.[5]

In 1981, the company's shares were floated on the London Stock Exchange[2] and in 1982 merged with Mothercare Group to form Habitat Mothercare Group PLC.[2] The now-listed company bought the furniture retailer Heal's and the Richard Shops fashion chain in 1983.[2] In 1986, the company merged with British Home Stores to form Storehouse plc.[2] In 1992 Habitat was purchased from Storehouse by IKANO.[2] In October 2009, following several years of trading losses, the Kamprad family, who own IKANO, put the company up for sale,[6] and it was sold to Hilco, a restructuring specialist, in December 2009 with the Kamprad family writing off the debts of the company and providing €50 million (£45 million) of working capital while Hilco paid about €15m.[7] 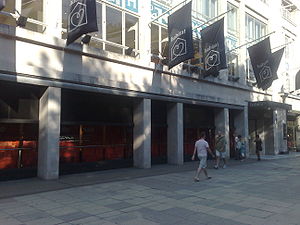 In October 2009, Habitat employed 1,574 staff and operated in 71 stores: 35 in the UK, 26 in France, five in Spain and five in Germany.[6] The company used to have stores in Galway and Dublin in the Republic of Ireland but these were closed down in 2008.[8] In addition, the company operates stores or concessions in Belgium, Greece, Iceland, Indonesia, Luxembourg, Portugal, Thailand, Turkey and Scandinavia. The company also operates sourcing offices in Italy, Poland, Slovenia and China.

In June 2009 Habitat was criticised for taking advantage of the list of trending topics on the social-networking service Twitter to promote its products.[9] These topics included hashtags referring to Apple, the iPhone, Mousavi (the Iranian Presidential Candidate) as well as other hashtags relating to the 2009 Iranian election protests. Because the products being promoted had nothing to do with the subject of the hashtags Habitat's actions were considered to be spam. Habitat's PR department reacted quickly to delete the offending posts and blamed an intern for the inappropriate use of the hashtags and apologised to Twitter users for their actions. However the identity of the intern was not revealed,[10] leading to suspicion of a cover up. Habitat returned to Twitter in September 2009.[11]

In January 2009, Habitat began planning a fully transactional web site to enter the online shopping market.[12] The site was launched in November 2009, based on an E-commerce application from BT Fresca, with a back-end by LShift, after a period when only a small number of products were available online.[13] Following feedback, the company announced a new website in January 2011, offering online delivery to UK, Germany and Republic of Ireland.[14]

On the 24th June 2011 Hilco, who had owned Habitat UK Ltd since December 2009, announced that they were putting the company into administration. Home Retail Group, owner of Argos and Homebase purchased the Habitat brand, three Central London stores and the UK website. The UK business was registered under the name Habitat Retail Ltd, a wholly owned subsidiary of Home Retail Group. Home Retail Group will retain approx 100 staff at the London stores and around 50 in head office, including many of Habitat's in-house designers, buyers and merchandisers. Cafom, a company registered in France, purchased Habitat's European businesses. As of 11th September 2011, all other Habitat stores in the UK had been closed by Hilco with around 750 employees being made redundant.