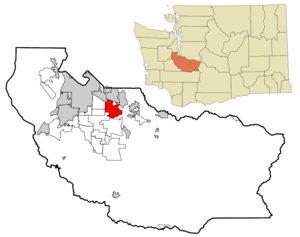 Puyallup, Washington (pronEng|pjuːˈɑːləp) is a city in Pierce County, about five miles east of . The population was 33,011 at the 2000 census and estimated at 36,930 in 2008 by the [cite web|url=http://www.ofm.wa.gov/pop/april1/finalpop2008.pdf|title=April 1 Population of Cities, Towns, and Counties - Used for Allocation of Selected State Revenues|publisher=, Office of Financial Management, Forecasting Division|date=2008-06-30|accessdate=2008-07-08] . Named after the Puyallup Tribe of Indians, Puyallup means "the generous people."

Native Americans numbered about 2,000 in what is now the Puyallup Valley in the 1830s and 1840's. The first European settelers arrived in the 1850s. In 1877, platted a townsite and named it Puyallup after the local Puyallup Indian Tribes. By the 1880s Puyallup had become a major hop growing region and more people flocked to the area. The town grew rapidly throughout the 1880s and the town was incorporated in 1890, the first mayor being . The Turn of the 20th Century brought change to the valley with the growth of nearby Tacoma and the Interurban rail lines. The Western Washington Fairgrounds were developed giving local farmers a place to show off their crops and livestock. During the early part of the fairgrounds were home to over 7,000 Japanese residents, most of them whom were American citizens, at .Fact|date=July 2008

The valley in which Puyallup was originally settled is the heart of the town. Its fertile soil is optimal for the acres of daffodils which are grown for distribution world-wide, and are featured in the town's annual spring parade. Despite the region's slug species, citizens are able to grow lush vegetable gardens in soil which has been nourished by eons of volcanic and glacial geologic activity. The Puyallup River meanders between the hills, through the glacial basin, from its name-sake glacier on Mt. Rainier, terminating in the Port of Tacoma, into the Puget Sound. It is cold, silty and greenish in color due to its glacial contents, and alpine origins. From most perspectives in the town of Puyallup, Mt. Rainier is visible to the south east, making the snow-covered cascade volcano a symbol of the town's strong northwestern natural tradition and culture.

Downtown Puyallup has several notable landmarks, including 's mansion, which was built and inhabited by one of the town's founding families, who made their way to Puyallup via the Oregon trail. The downtown shopping district is made up of historic buildings, which date to the town's origin, and maintain the architecture of the pioneer spirit that formed much of the west. Pioneer Park, the town's center, is a community focal point, which boasts an impressive new public library, and a pleasant civic park, with a playground, and walking paths that wind through cut green grass, between shady old trees. As the focal point of the town, the park's main attraction is a bronze statue honoring Ezra Meeker. Southeast Puyallup is also where the begins.

Puyallup is home to the Puyallup Fair, the largest annual in Washington attracting over 1 million people a year. The Puyallup Fair is also one of the ten largest fairs in the country. The city itself is built around the Puyallup Fairgrounds and the fairgrounds can be seen prominently from neighboring South Hill. The fair traditionally runs for three weeks in September and one weekend in April (i.e., the "Spring Fair"). The fair serves as an anchor for unique local businesses and restaurants. "Do The Puyallup" has been a longstanding promotional .

During , The Puyallup Fairgrounds (i.e., The Puyallup Assembly Area) were used as an for United States citizens or residents of Japanese descent or origin that was called "." [ [http://www.lib.washington.edu/exhibits/harmony/exhibit/ Camp Harmony Exhibit.] , University of Washington online]

Puyallup also hosts and is origin of the annual four-part Daffodil Parade, which takes place every year in Tacoma, Puyallup, Sumner, and Orting.

Puyallup is known for its myriad stores, many of which are located next to each other on the main north-south street of Meridian. Puyallup is one of many cities and towns in Washington that contains an 'old-fashioned' shopping area.

The Karshner Museum is the only K-12 teaching museum owned and operated by a school district West of the Mississippi. The essential education and curriculum-based program serves the Puyallup School District's 20,000 K-12 student population. Since 1930, the Karshner Museum has provided hands-on and curriculum-based learning experiences to thousands of students through the museum visit program. The education trunk or “Discovery Kit” program has been serving students, teachers and community members since the 1970’s. These Kits ultilize real or replica artifacts for the purposes of bringing history, art and culture to life in the school classroom.

Starting in 1995, the regional nonprofit organization Valley Arts United began working with local volunteers to support a rotating selection of outdoor public artwork. Consisting mostly of statuary dispersed about the downtown core, this collection has grown to a collection of about 32 permanent pieces. New works are added regularly. [ [http://www.valleyartsunited.org/ Valley Arts United] ]

Every Saturday (9 a.m. to 2 p.m.) and Sunday (10 a.m to 2 p.m.) from early May to late October, there is a located in Pioneer Park in downtown Puyallup, where many locals gather to sell home-grown produce and plants as well as baked goods and crafts. It is located at Pioneer Park, in the modern pavilion building next to the library.

The is home to over 30 schools. 20,000+ students attend the district. The district is the ninth largest in Washington state, and extends to neighboring , some of , and the area. [ [http://www.puyallup.k12.wa.us/employment/hr/ Overview of Puyallup School District] ]

The Herald is the local for eastern Pierce County. It is published once a week on Thursdays. The paper is distributed by . [ [http://www.puyallup-herald.com/aboutus/index.html About the Puyallup Herald] ]

*Contrary to the conventions in surrounding areas, Puyallup's streets generally run north-south, and its avenues run east-west.
*Though Puyallup is often known for its numerous one-way streets, there are in fact only two, which is really one; 3rd Street (Northbound), which transitions into 2nd Street (Northbound), and Meridian (southbound).