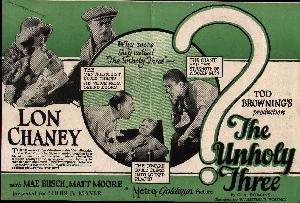 In both the 1925 and the 1930 version, the roles of Professor Echo and Tweedledee are played by Lon Chaney and respectively.

Three performers leave their lives of captivity after a child is assaulted at one of their shows and become "The Unholy Three." Echo the assumes the role of Mrs. O'Grady, a kindly old grandmother, who runs a bird shop. Tweedledee, "The Twenty Inch Man," becomes her grandchild, and Hercules (played by ) is their assistant. Soon an incredible crime wave is launched from their little store.

Convincingly disguised as a little old lady, Echo and his two cohorts perform a series of robberies. Echo's sweetheart Rosie (played by ) plays along with the Unholy Three but changes her mind when their latest , which ended in , threatens to send an innocent man (who is also Rosie's Lover) to the .

During the scene where Echo and company are fleeing the pet store, Echo decides to take his pet ape with them. The "Ape" was actually a three-foot-tall who was made to appear gigantic with camera trickery and perspective shots. When Echo removes the ape from his cage, the shot shows Echo (with his back turned to the camera) unlocking the cage and walking the ape to the truck. The ape appears to be roughly the same size as Echo. This effect was achieved by having midget actor Harry Earles (who played "Tweedledee" in the film) play Echo for these brief shots, and then cutting to the normal sized Lon Chaney, making it seem as though the Ape is gigantic. (In the 1930 remake the ape is played by a man in a costume.)