Michael Wayne (Mike) Godwin (born October 26, 1956) is an American attorney and author. He was the first staff counsel of the Electronic Frontier Foundation (EFF), and the creator of the Internet adage Godwin's Law of Nazi Analogies. From July 2007 to October 2010, he was general counsel for the Wikimedia Foundation. In March of 2011 he was elected to the Open Source Initiative board.[1]

Godwin was educated at Lamar High School in Houston,[2][3] before graduating in 1980 from the University of Texas at Austin with a Bachelor of Arts in the Plan II Honors program. Godwin later attended the University of Texas School of Law, graduating with a Juris Doctor degree in 1990. While in law school, Godwin was the editor of The Daily Texan, the student newspaper, from 1988 to 1989.[4]

In his last semester of law school, early in 1990, Godwin, who knew Steve Jackson through the Austin bulletin board system community, helped publicize the Secret Service raid on Steve Jackson Games. His involvement is later documented in the non-fiction book The Hacker Crackdown: Law and Disorder on the Electronic Frontier (1992) by Bruce Sterling.[5] 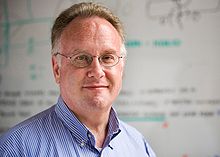 As a lawyer for EFF, Godwin was one of the counsel of record for the plaintiffs in the case challenging the Communications Decency Act in 1996. The Supreme Court decided the case for the plaintiffs on First Amendment grounds in 1997 in Reno v. American Civil Liberties Union. Godwin's work on this and other First Amendment cases in the 1990s is documented in his book Cyber Rights: Defending Free Speech in the Digital Age (1998), which was reissued in a revised, expanded edition by MIT Press in 2003.

Godwin has also served as a staff attorney and policy fellow for the Center for Democracy and Technology, as Chief Correspondent at IP Worldwide, a publication of American Lawyer Media, and as a columnist for The American Lawyer magazine. He is a Contributing Editor at Reason magazine,[7] where he has published interviews of several science-fiction writers.[8]

From 2003 to 2005, Godwin was staff attorney and later legal director of Public Knowledge, a non-governmental organization based in Washington, D.C., concerned with intellectual property law. In recent years, Godwin has worked on copyright and technology policy, including the relationship between digital rights management and American copyright law. While at Public Knowledge, he supervised litigation that successfully challenged the Federal Communications Commission's broadcast flag regulation that would have imposed DRM restrictions on television From October 2005 to April 2007, Godwin was a research fellow at Yale University, holding dual positions in the Information Society Project (ISP) at Yale Law School,[9][10] and at the Yale Computer Science Department's Privacy, Obligations and Rights in Technologies of Information Assessment (PORTIA) project.[11]

Godwin was general counsel for the Wikimedia Foundation from 3 July 2007[12][13] until 22 October 2010.[14][15] Commenting on the self-correcting nature of Wikipedia in an interview with The New York Times in which he freely acknowledged that he had edited his own Wikipedia article, Godwin said, "The best answer for bad speech is more speech."[16] When the Federal Bureau of Investigation demanded in July 2010 that its seal be removed from Wikipedia, Godwin sent a whimsical response denying the demand and describing the FBI's interpretation of the law as "idiosyncratic ... and, more important, incorrect."[17][18][19]

The character "Michael Godwin" in The Difference Engine by Bruce Sterling and William Gibson was named after Godwin as thanks for his technical assistance in linking their computers to allow them to collaborate between Austin and Vancouver.[5]

Godwin originated Godwin's law: "As an online discussion grows longer, the probability of a comparison involving Nazis or Hitler approaches 1." Godwin believes the ubiquity of such comparisons trivializes the Holocaust.[22]